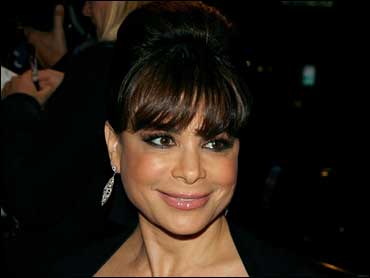 Paula Abdul says she didn't figure out her purpose in life until she became a judge on Fox's "American Idol."

"I knew since I was a little girl that I had this profound way of touching people. My purpose is bringing out everybody's best and being that cheerleader to other people's success," the 44-year-old singer-dancer tells OK! magazine in its latest issue.

"Being a judge on 'American Idol' overshadows being a Grammy Award winner and selling millions of records," she says.

"I have four titanium plates in my neck. I've had 14 surgeries over the years. I had an operation the same evening as the first season finale of 'American Idol,'" she says. "It can come and go at any time, but I no longer have the intense nerve pain that is associated with RSD, thank God."

Abdul — who says she was hit by a drunk driver in 1987 and injured in an emergency plane landing in the early '90s — says she is treated with anti-inflammatory medications and has massage and acupuncture treatments for her pain.

"If I appear exhausted on television, it's because I am!" she says. "I have a lot of sleepless nights because I'm in so much pain. I was taking far more medication on earlier seasons (of 'American Idol'), and nobody said anything. I try to say something and I stumble, and that's what people have picked up on. I'm not polished."

When asked how she responds to claims that her behavior during "Idol" is sometimes bizarre, Abdul replies:

"I'm sick of it. I've never been drunk. I don't do recreational drugs. It's defamation of character," she says.

The choreographer and former Laker girl also says: "I'm a warrior. I'm not the best dancer, and I'm certainly not the best singer, but I am an entire package of a great performer."