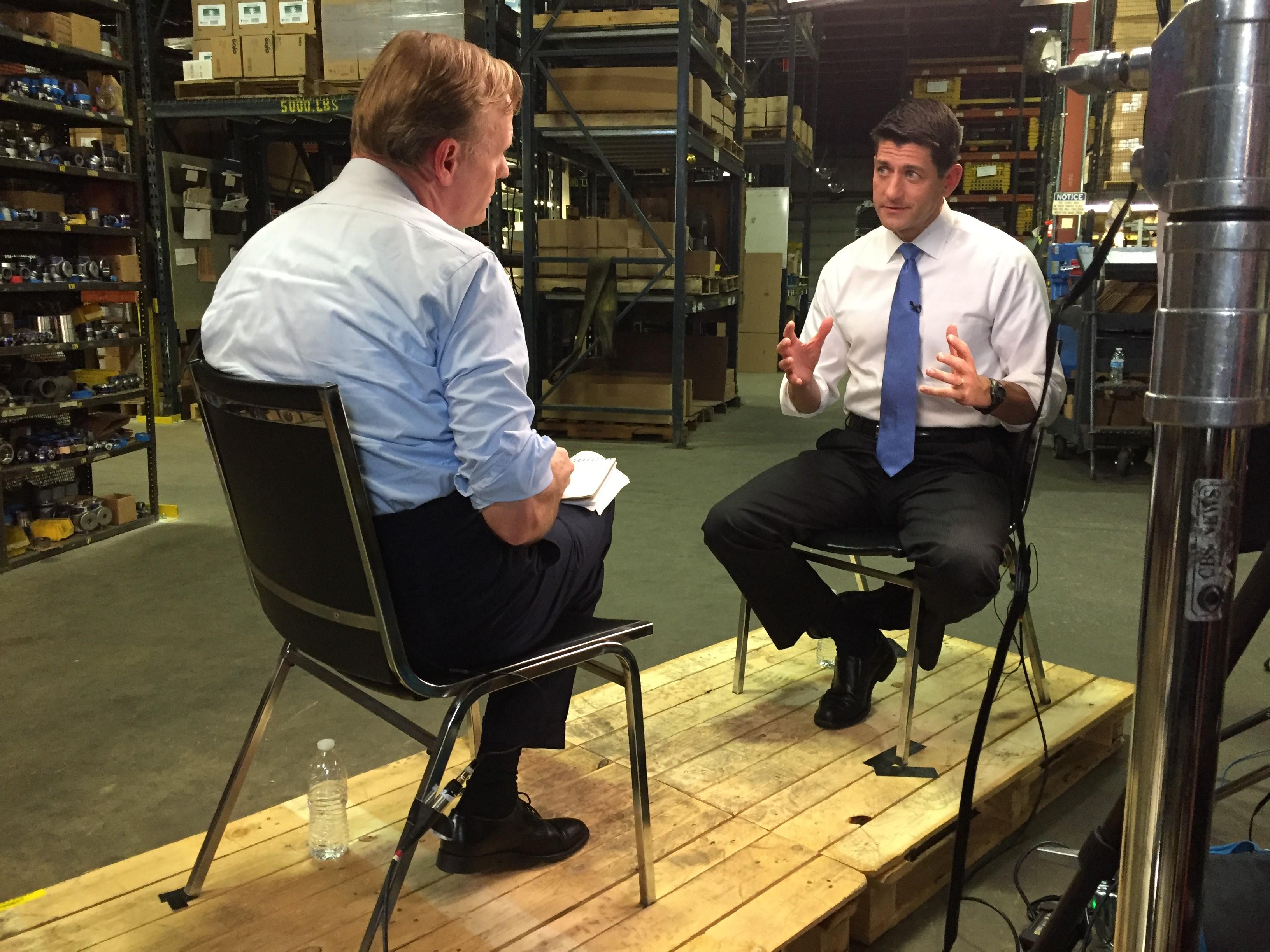 House Speaker Paul Ryan is pushing ahead with the Republicans' latest effort to overhaul the nation's tax code, telling CBS News' "Face the Nation" that the main goal of the plan is to "help the people who are working paycheck to paycheck and keep more of their own hard-earned dollars."

"They haven't had a break in a long time," Ryan said. "Our economy's been growing between one and two percent for a long time. We haven't had three percent growth in about a decade, and that means workers are struggling."

The White House rolled out the new tax plan last week. It aims to decrease the number of individual tax brackets from seven to three and lower taxes on businesses. However, it leaves many of the details -- such as the income levels accompanying those tax levels -- to the tax-writing committees in Congress.

When asked if he could guarantee that everyone in the middle class will see a tax cut if the proposal passes as a bill, Ryan said, "Well, I don't know every single person's little, small problem or issue."

"Do you have kids? Because there's going to be a bigger child tax credit. Are you married? You're going to have zero marriage penalty," Ryan continued.

The Republican Party is looking to tax reform as it comes to terms with the failure of efforts to repeal and replace the Affordable Care Act. Republicans, including Ryan and President Trump, are pitching the tax plan as a boon for the middle class.

In a Wednesday speech in Indiana announcing the tax plan, Mr. Trump emphasized his "explicit commitment that tax reform will protect low-income and middle-income households, not the wealthy and well-connected."

"I can't guarantee anything. You can always find a unique family somewhere," Cohn told ABC's George Stephanopoulos in an interview that aired on "Good Morning America." He said a family of four earning $55,000 could expect to see a tax decrease between $650 and $1,000, but acknowledged there are always exceptions to any rule.

Analysts are skeptical about the tax plan's benefits for the middle class. The Tax Policy Center found that roughly 30 percent of Americans earning between $50,000 and $150,000 would pay more to Uncle Sam. The nonprofit think tank's analysis found the cuts would benefit the wealthy more than middle-income and low-income families, with the top one percent of earners benefiting from 50 percent of the cuts.

Ryan said the plan will be deficit-neutral, but did not also suggest it will be revenue-neutral. The TPC estimates the plan will reduce federal revenue by $2.4 trillion over the next decade.

Republicans are depending on economic growth to pay for the cuts.

Ryan said this "will have to be a deficit-neutral tax bill" for it to pass. Ryan said he and other Republicans "fundamentally believe that this tax code and this tax reform will give us faster economic growth."

Ryan said entitlement reform also needs to be tackled, but tying it to tax reform would "kill tax reform."

Ryan also addressed the president's divisive response to the August violence in Charlottesville, Virginia, that left one woman dead during a white nationalist rally. Ryan said he thinks the president is "learning," and, "his heart's in the right place."

"I've had some candid conversations with him about this," Ryan said. "Especially during that time. I've had some very candid conversations. And so I do really believe his heart's in the right place. I think what matters is that we have to show people that we are an inclusive society that--that--that we want everyone to succeed. And I think there's more that all of us as leaders have got to do to be inclusive with people and make people feel like they're included in society. And I don't -- I think we've got a lot -- a long ways to go, just as a society and a country for that."

In light of the other race-related tension that has emerged over the NFL national anthem controversy, Ryan said there need to be distinct, separate conversations, and the sides aren't understanding each other.

The debacle began after Mr. Trump, during a rally in Alabama, attacked the NFL and players who kneel during the national anthem.

Ryan said the president has a "point which is -- what I think a lot of people who are protesting on that don't necessarily see is that other people see it as disrespecting the country, what it stands for, the flag and the people who died to protect it."

"So I think clearly people have a right to express themselves in the first amendment however they want to," Ryan said. "But what so many Americans, I see this at home, see is you're disrespecting the idea of America, that we want to make this free country a more perfect union and that people have died and fought and survived to protect it. So they don't see the point that they're trying to make. That's what I'm trying to say. So yes, I think we should just have separate and distinct conversations. Because when you merge it into the flag and the anthem, it's lost."