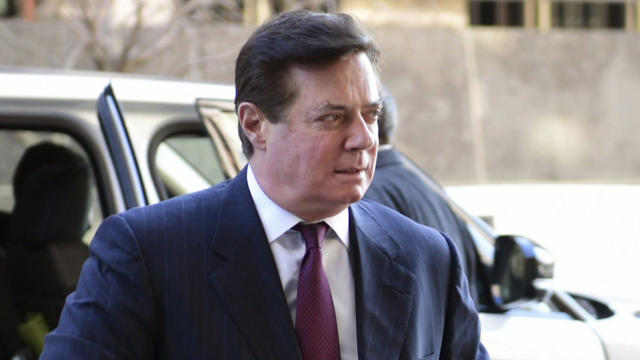 In a sentencing conference on Friday, attorneys for special counsel Robert Mueller and former Trump campaign chairman Paul Manafort agreed upon a tentative sentencing date of March 5, 2019. Manafort pleaded guilty to conspiracy against the United States and conspiracy to obstruct justice in September. Manafort was not present for the proceeding.

President Trump has not ruled out pardoning Manafort. He told the New York Post earlier this week that while it "was never discussed, I wouldn't take it off the table." Manafort's lawyers have routinely briefed the president's lawyers about Manafort's cooperation with the special counsel, giving them a window into what the special counsel is interested in pursuing.

But the president's former campaign chairman may also face more charges, too, stemming from the special counsel's conclusion that he lied repeatedly to the government after signing a plea agreement to avoid his second trial. On Monday, the special counsel filed a report on Monday accusing Manafort of lying to federal investigators, thereby breaching the terms of his plea agreement.

Government attorney Andrew Weissmann brought up the filing in court. Although Judge Amy Berman Jackson said she wouldn't be considering the merits of the government's allegations Friday, she did ask if the government intended to bring any further charges against Manafort as a result of the alleged plea breach. Weissmann replied that he didn't know yet.

Kevin Downing, Manafort's attorney responded that "there are a lot of unknowns for us."

Jackson ordered the special counsel to make its filing on the breach of the plea agreement by Dec. 7, and she said that the defense would have until Dec. 12 to decide how much time it needs to respond to the allegations.

The Mar. 5 sentencing date in Washington, D.C. is separate from the one associated with the eight charges Manafort was convicted of in the Eastern District of Virginia. He is scheduled to appear before Judge T.S. Ellis for sentencing in relation to that conviction on Feb. 8, 2019.