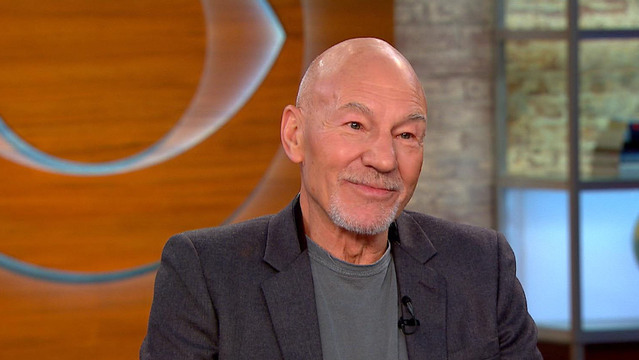 Actor Sir Patrick Stewart is branching out into new territory, starring in the Starz comedy "Blunt Talk" where he plays a personally dysfunctional, but well-intentioned British journalist looking to conquer the world of American cable news.

Despite his prolific on-screen career, it is this role that provided Stewart the opportunity to act in his "first post-coital scene" ever.

"I emailed three actress friends and said 'What's the form? What do you do? How far can I go? If I kiss her, do I use tongue? Can I touch body parts?'" Stewart said Thursday on "CBS This Morning."

He said he was terrified for the new task with guest-star Elizabeth Shue, but assured he wasn't completely inexperienced.

"Not (first) in my own life you understand, but in front of television cameras," he said.

In 1987, the world was introduced to Stewart as Captain Jean-Luc Picard. He gained fame from his iconic role in "Star Trek: The Next Generation" and also as Professor Charles Xavier in the "X-Men" films.

Although Stewart has played countless other roles, it's those two characters with whom audiences associate him most.

"Upright, worthy, noble, intelligent, sensitive, compassionate, caring individuals, and that sort of stuck, but that's not me either, you know. I'm a mess. I'm an absolute wreck. I'm hopeless," he said.

On "Blunt Talk," Stewart plays Walter Blunt. The name derives from the actor's own pseudonym, borrowed from the first character he played with the Royal Shakespeare Company.

Blunt has quite a colorful private life -- he's caught with a transgender prostitute in a car in the first episode --but to the public, he's serious journalist whose ambition, Stewart said, is to make a better world.

Stewart had his own experience in news at a young age. The 15-year-old secured a job at a local newspaper in his small English town of Mirfield, but problems arose when evening classes at amateur theater companies clashed with his work.

Stewart quit when his editor gave him an ultimatum -- clean up his act at the paper, or pack up.

He's a self-professed news junkie and said one of his many inspirations for the role was "CBS This Morning" co-host Charlie Rose.

And while, like Piers Morgan, Blunt is a British expat working in the American news industry, Stewart said the character is not based on the journalist.

"He accused me of playing him in a restaurant one morning so I was able to reassure him -- not at all -- and the next day we met and he talked to me very openly and frankly about being a British journalist working on an American news program, which was very useful for us," he said.