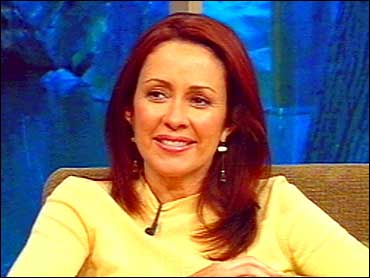 Patricia Heaton has spent the last seven years starring opposite comedian Ray Romano on the CBS hit sitcom "Everybody Loves Raymond," which revolves around Ray Barone, a successful sportswriter living on Long Island with his family.

She tells The Early Show that as the seventh season of "Everybody Loves Raymond" winds down, Ray's brother Robert (Brad Garrett), a divorced policeman, has finally moved out of his parents' house, and found love. He is engaged to Debra's best friend, Amy.

Heaton says she believes the thing to watch on the television show will be the relationship between Debra and her mother-in-law. Debra's been the only daughter-in-law for Marie throughout the show. Now Debra's best friend Amy is marrying into the family. She says it'll be interesting to see whether or not Debra is pushed aside by Marie.

Because all the episodes of this season's "Everybody Loves Raymond" were taped already, Heaton has some insight on what to expect in the coming season.

She says audiences should pay close attention to the bridal shower episode.

Debra throws Amy a bridal shower and it turns disastrous. The shower is so bad that after the shower, Debra takes her place quietly as "just a bridesmaid," says Heaton.

Also, Heaton says, the show will introduce new characters that will add energy, chaos and confusion, but always in a fun way.

Some of Heaton's first acting jobs weren't for television but for the theater. She made her Broadway debut in the gospel musical "Don't Get God Started." She and fellow students then formed Stage Three, an acting company that produced plays off-Broadway. They took one production, "The Johnstown Vindicator," to Los Angeles, where Heaton's performance caught the eyes of casting directors.

Some of her television experience includes, "Room for Two," "Women of the House," "Someone Like Me," and "Thirtysomething," in which she had a recurring role.

She made a few television movies, such as "Miracle in the Woods," with Della Reese, and the upcoming "A Town Without Christmas," both for CBS. Her feature film credits include "Memoirs of an Invisible Man," "Beethoven," "New Age" and "Space Jam."

Heaton is about to begin work on TNT's "The Goodbye Girl," and she is also the author of "Motherhood and Hollywood: How to Get a Job Like Mine," a collection of humorous essays.

"Everybody Loves Raymond" can been seen every Monday night at 9 p.m. on CBS.