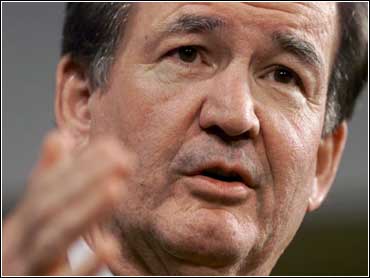 Buchanan, known for controversial statements and often accused of cultural intolerance, said liberals are denying others "their right to march under a banner of their hero."

"This is part of a cultural war that manifests itself not only in attacks on Columbus, but George Washington's name is being pulled off schools in New Orleans. Robert E. Lee's name is being desecrated in Richmond. Custer's name is being removed from Custer National Battlefield," said Buchanan, in Denver on Monday.

Police arrested 147 Native American and Hispanic activists Saturday who tried to block Italians from holding a parade honoring Columbus. The activists, who accuse Columbus of slave trading and genocide, did not resist arrest.

It was the first Columbus Day parade in Denver since 1991, when Native American activists clashed with parade participants. An agreement to delete the reference to Columbus in exchange for no protests collapsed last month.

"There's no doubt that back in Western history things wrong have been done, but the Native Americans are guilty of their own atrocities and their crimes. But we still honor Native Americans," Buchanan said in a telephone interview.

"I knew Martin Luther King and I disagreed with some of the things he did, but the African Americans certainly have a right to honor him. And we ought to respect that right," he said.

"I think what is going on here is an intolerant militant left-wing group is attempting to deny Italian Americans their right to march under a banner of their hero, who is also a hero of Western civilization."

"It's all part of a political correctness, which is another name for cultural Marxism. It is anti-European and anti-Western civilization," he said. "We have a right to our heroes and they to theirs."

The former Republican presidential candidate was widely criticized for a campaign book, A Republic, Not an Empire, that questioned the need for American intervention against Nazi Germany in World War II.