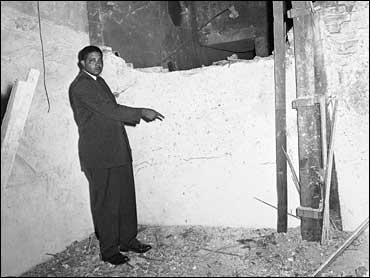 The Rev. John H. Cross Jr., who dug through the rubble of his Alabama church looking for survivors of a bombing, then presided over a funeral for some of the youngest victims of civil rights-era violence, has died. He was 82.

Cross, who had been in failing health since a series of strokes, including internal bleeding and other medical problems, died Thursday at DeKalb Medical at Hillandale, his daughter, Barbara, said in a telephone interview Saturday.

In 1962, he became pastor of the Sixteenth Street Baptist Church in Birmingham, which had become a haven for civil rights activities. On Sept. 15, 1963, a bomb went off during preparations for a youth service.

Barbara Cross, who was 13 at the time of the bombing and was inside the church but not seriously injured, remembers that her father started digging through the debris right after the explosion.

"After the dynamite went off, it dug a large crater," she recalled. "He had to go through that rubble to make sure all of the children were OK."

As he dug, other people there told him to stop, worried that there could be another blast.

The elder Cross later presided over a mass funeral for three of the four girls killed by the blast. The Rev. Martin Luther King Jr. delivered the eulogy.

In the years after the bombing, Cross focused on reconciliation among people of all races.

"He realized after the bombing, there was work to be done," Barbara Cross said. "That was his calling."

Cross stayed at the church until 1968, when he became director of the Baptist Student Center at Alabama State University. In 1972, he moved to Decatur to become associate pastor of Oakhurst Baptist Church. In 1977, he was named the black church relations director for the Atlanta Baptist Association, a post he held until he retired in 1989.

His funeral is set for Tuesday at Greenforest Community Baptist Church in Decatur, Ga.