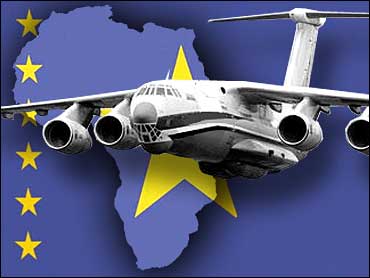 The rear door of a cargo plane burst open over Congo, hurling dozens of soldiers, their wives and children to their deaths while others survived by clinging to the aircraft as it returned to the airport, officials said Friday.

There was confusion over the death toll. Two officials at the international airport told The Associated Press that 129 people were feared dead. Later, a third official estimated the casualties were about half that, saying the exact figure may be difficult to determine because of an incomplete manifest. The officials spoke on condition of anonymity.

The plane, a Russian-built Ilyushin 76, lost its door at 33,000 feet about 45 minutes after takeoff Thursday night from Kinshasa, the capital of the central African nation, said government spokesman, Kikaya Bin Karubi.

Seven people were confirmed dead and military helicopters were searching the region for more casualties, the spokesman said. Karubi did not provide details but confirmed that those who died had been "ejected from the plane."

People in Africa often travel on overcrowded, modified cargo planes that have few seats, leaving most passengers to cram in among belongings in the rear of the aircraft.

"They were traumatized," said Kabamba Mbwebwe, a doctor who treated victims. "The door opened and the plane depressurized. Many were sucked out."

The flight crew managed to fly the plane back to the capital, where it could be seen the next day on the tarmac, missing a door.

It was not known how many people were on the plane or whether they had seats or seatbelts. People in Africa often travel on modified cargo planes that have few seats, leaving most passengers to cram in among their belongings in the rear of the aircraft.

The privately owned plane apparently had been chartered to transport Congolese soldiers and their families from Kinshasa to the southeastern city of Lubumbashi, a diamond center. Soldiers regularly provide security in Congo cities, often traveling as a group between assignments.

It was not immediately known why the door came open. The weather was clear. There were no suggestion of sabotage.

The plane's owner was not immediately identified. The logo says "Ukrainian Cargo Airlines."

The Ilyushin 76 is a medium- to long-range transport jet. The model was first flown in 1971. It is widely used around the world, particularly in Africa, the Middle East and Asia, as a civilian carrier.

The plane has had a checkered safety record, including 47 accidents that resulted in 668 deaths, according to the Aviation Safety Network Web site, an air safety data base.

On Feb. 19, an Ilyushin 76 crashed in bad weather in Iran, killing 275 people, including more that 200 elite Iranian soldiers. A month earlier, another of the jets crashed while landing in thick fog in East Timor, killing all six people on board.

Kinshasa residents still have painful memories of a plane disaster on Jan. 6, 1996 that left as many as 1,000 people killed when a Russian-built Antonov crashed into a crowded market at the end of a runway near a Kinshasa airport.

Congo is in the fifth year of a civil war that has led to more than 2.5 million deaths, aid groups estimate, mostly from strife-related hunger or illness. Despite a series of peace deals, fighting persists in the northeast.