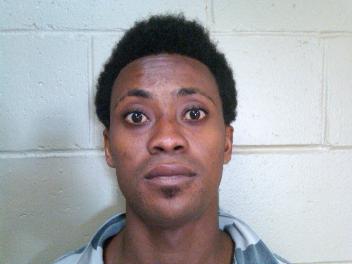 (CBS/WWL) PAINCOURTVILLE, La. - After a driver was pulled over for a seat belt violation in Paincourtville on Sunday, the man in the back seat of her car jumped into the front seat, pushed the other passenger out and sped off with the car, according to the Assumption Parish Sheriff's Office.

The man, 28-year-old Jermaine A. Moland, told the front passenger that he was about to run before pushing her out onto  the gravel road where she hit her head, said deputies, according to CBS affiliate WWL.

The driver who'd been stopped had gotten out of the car to show  her registration and proof of insurance to police, WWL reported.

Authorities say after Moland commandeered the car he drove through several yards where numerous children and adults had to run and jump out of the way to avoid being run over.

The abandoned vehicle was found a few miles away and deputies began to search the area. A resident of a nearby subdivision alerted deputies that she heard something moving in her shed.

Deputies found Moland in the attic of the shed along with a paper napkin filled with a green vegetable substance believed to be marijuana.

He was booked on numerous charges including battery, driving under suspension, motor vehicle theft, marijuana possession and resisting an officer.

Moland was being held in Assumption Parish Detention Center.