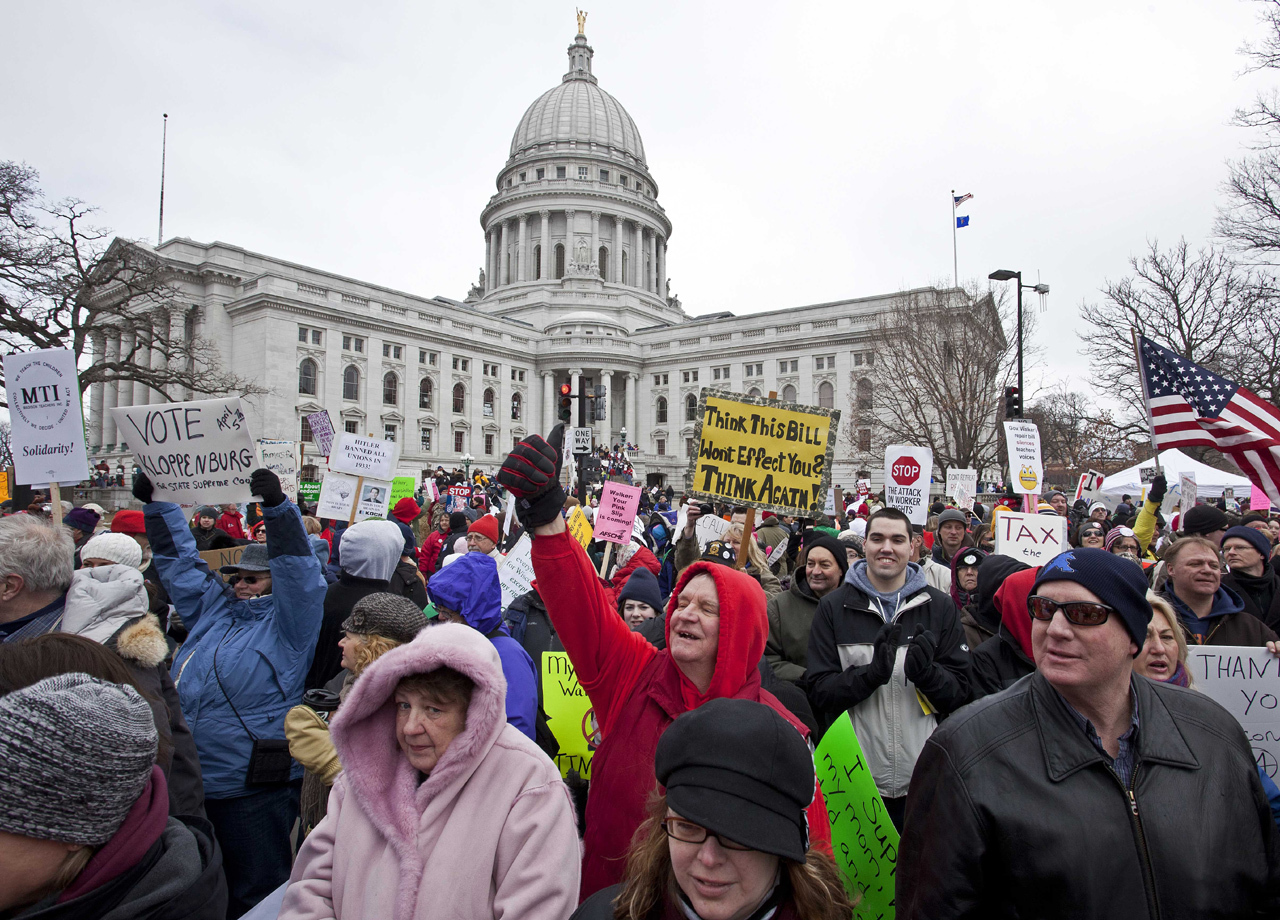 (AP) MADISON, Wis. - A federal judge upheld most of Wisconsin's contentious law curbing collective bargaining rights on Friday, but he sided with unions by overturning two portions of the law that were costly and impeded on a major funding source for the groups.

One banned public workers from allowing union dues to be automatically withdrawn from their paychecks, while the other required expensive annual elections where all members, not just those voting, would have to support staying organized. Still, the ruling keeps in place the majority of the law championed by Republican Gov. Scott Walker.

A coalition of seven large unions filed the lawsuit last summer, shortly after the Republican-controlled Legislature approved Walker's plan following months of bitter debate and protests that drew tens of thousands of people to the Wisconsin Capitol.

One of the lawsuit's primary arguments was that the law violated the equal protection clause of the U.S. Constitution because it stripped those bargaining rights from most — but not all — public employees in Wisconsin. Firefighters and law enforcement officers aren't covered by the law, which restricts other public workers to collectively bargain only for wage increases that are no greater than the rate of inflation.

U.S. District Judge William Conley rejected that argument. Conley said the governor had a legitimate concern when he decided to exempt police, prison guards, firefighters and most other law enforcement officers since a strike by those workers would put the public at risk.

The judge also said he wasn't swayed by the fact that the exempted workers supported Walker during his run for governor in 2010, while those covered under the law opposed him.

"This is not an ordinary case in any number of respects, but it is ordinary in that sense that political favoritism is no grounds for heightened scrutiny under the Equal Protection clause," Conley said. "(The law) may cripple unions representing general employees, but these unions and its members are certainly not a powerless class."

But in agreeing with unions that other elements of the law were unconstitutional, the judge ordered that public employees be allowed no later than May 31 to designate an automatic paycheck withdraw for union dues.

Attorney General J.B. Van Hollen, whose office is representing the state, and a union attorney both said they were weighing whether to appeal.

Walker's spokesman Cullen Werwie said he was confident that the law would be upheld. While the ruling on automatic dues and recertification votes "may give the unions more power over their members, it does nothing to benefit the public employees of this state," he said.

Democratic opponents of the law praised the court ruling, even though the victory was limited.

"There is a lot of work to do to repair the damage done by Gov. Walker and his fellow Republicans over the past year," said Democratic Assembly Minority Leader Peter Barca. "Today's decision is a good first step."

Union attorney Tim Hawks said the unions were disappointed they didn't win on the broader argument but happy with their success in fighting the other two issues.

Most major unions did not hold votes last year asking members whether they wanted to stay unionized, as required by the new law, because of the difficulty and expense of holding an election and because the law so limited their collectively bargain rights.

Before the law took effect, all union members had to pay dues whether they wanted to or not. The law struck that down, but it also made it illegal to automatically withdraw money from the paychecks of workers who wanted to pay those dues.

The judge ruled it was illegal to bar the automatic voluntary withdrawal. The law doesn't limit union members' speech, "but it does bar the most efficient method by which these unions collect and their members pay dues," Conley said.

The Wisconsin Education Association Council argued that not having the automatic dues withdrawal option would cost it an additional $375,000. Hawk, the union attorney, said he had no idea what the total loss would be for unions suing the state.

Walker's pushing of the law last year spurred massive protests and sparked a recall petition drive that resulted in the collection of nearly 901,000 signatures. Earlier Friday, the state elections board ordered that a recall election take place against Walker later this year.