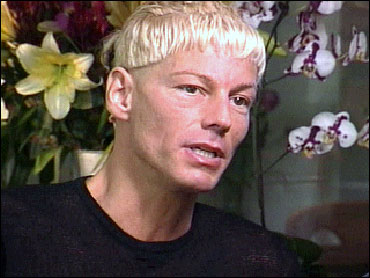 It's now time to get ready for Week Two, and DeAndrea and Wood are asking participants not to cook their food.

This is what's known as raw food – basically fruits and vegetables that have been grown organically and not cooked in any way. It has become the latest nutrition craze with celebrity followers, and a celebrity guru named Juliano Brotman.

Brotman, 34, owns a popular new restaurant in Los Angeles called Raw. The son of a chef who grew up eating junk food, Brotman turned vegetarian at 15 and went raw at 24.

His greatest claim to fame is making raw food look like real food. He's made a cheeseburger out of almonds, walnuts and mushrooms; linguine and clam sauce out of shredded zucchini; rice made with parsley, coconut, sesame seeds and macadamia nuts; and mashed potatoes made out of cauliflower and macadamia nuts.

"Everything you need can be derived from this food. This was here first. We've lived on this food since the Garden of Eden," says Brotman, who cites the benefits of a total raw food diet. "Can't get sick. Can't get a cold. Can't get a cold. A sore throat, you know. No tiredness. I mean, I'm like superhuman."

And what's more, Brotman says he never gains weight: "This is the diet that everyone is looking for, they just don't know it."

"My weight maintains itself. Sometimes I actually have to eat a little more to put weight on," says Alt. "When I was modeling, if I would have known that, I mean, what a freedom that would have been."

Alt, who's busy running her own cosmetics company, is so excited about raw food that she's writing a book about it.

So what happens to a vegetable when you cook it?

"It actually dies. Remember all fruits and vegetables are alive. That's the difference between raw and cooked food," adds Brotman. "This food is alive. It's vibrant. It has a life force. Whereas, cooked food no longer has its life force. It's just dead, rotting food."

But Roger Clemens, a food scientist at the University of Southern California, says that's absolutely not true: "As a matter of fact, in many cases if you raise it above 120 degrees, you're actually going to liberate a lot of nutrients. So if we don't cook them appropriately, we actually will not be absorbing the nutrients that these vegetables are supposed to be providing. You just excrete it. It would have no value to you whatsoever."

Clemens' colleague, Dr. Peter Pressman, teaches clinical medicine at USC. Both men are emphatic that detoxing diets are a myth.

"We have wonderful bodies. If you have a functioning liver, functioning kidneys and a functioning GI tract, you are really protected quite well," says Pressman. "And to suggest that three weeks of a simplified diet is going to help the situation is scientifically quite silly."

What's also troubling, they say, and even dangerous, is the quick shedding of pounds you lose on a total raw diet.

"If you find that this works for you and you do it again and again, you're likely to become deficient in many vital nutrients, and you're gonna begin to break down," says Pressman.

Back in Los Angeles, it's time to put their commitment to the final test. It's time to go all liquid in Week Three of detox with a green slush drink the program calls "Energy Soup."

This won't be easy for Stephanie, who also runs a catering business, serving pretty, fatty food to other people all day. She makes a face while trying the soup.

Greta, however, is having better luck – but only because she changed the recipe, adding more fruit to make it taste sweeter.

As for Angela, she tried it and hated it. And then she went to see her regular doctor. "I lost 10 pounds and told my doctor that I'm detoxing," she says. "She said to stop right away and start eating. I can't afford to lose weight."

After three challenging weeks, was it worth it?

Greta lost five pounds but learned a lesson. Life without cappuccino may not be worth living: "I can't imagine not enjoying cappuccinos and sugar …I want to eat a healthy, balanced diet and throw in some treats."

As for Stephanie, she's lost 25 pounds and has found a whole new way of eating. "You feel good when you're eating raw food. It sustains you. It's satisfying."

But she says the real lesson she learned was that there is no quick fix when it comes to getting into shape.

"I was really gung-ho, changing some things quickly," says Stephanie. "But I did learn that it's going to have to be gradual."

"48 Hours" speaks with person of interest in "killer clown" case
Thanks for reading CBS NEWS.
Create your free account or log in
for more features.
View CBS News In
CBS News App Open
Chrome Safari Continue
Be the first to know
Get browser notifications for breaking news, live events, and exclusive reporting.