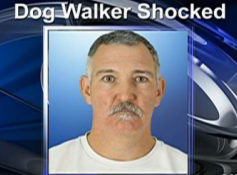 (CBS/AP) MONTARA, Calif. - A California congresswoman wants an independent investigator to determine if a federal park ranger used excessive force when she fired a stun gun at a man walking his dogs off-leash.

The San Francisco Chronicle reports Rep. Jackie Speier said in a letter to the head of the Golden Gate National Recreation Area, "Many of my constituents are understandably angered by what appears to be an excessive use of force by a park ranger. From the information I have to date, it does not appear that the use of a Taser was warranted."

50-year-old Gary Hesterberg was walking two small dogs off-leash when he was stopped by a ranger Sunday afternoon in Rancho Corral de Tierra. The area in which he was walking is newly incorporated into the national park system, and dogs are required to be on a leash.

Hesterburg allegedly gave a fake name to the ranger, who then asked for backup, said Howard Levitt, a spokesman for the recreation area.

Hesterberg challenged the ranger's authority to detain him and tried to leave, Levitt said. The ranger then grabbed his arm and warned him to stay where he was, threatening the Taser.

Hesterberg told the ranger not to stun him because of a heart condition, but still tried to walk away, a witness said. The ranger then shot him in the back with the shock device.

Hesterberg, 50, was checked out by paramedics at the scene and arrested on suspicion of failing to obey a lawful order, having dogs off-leash and knowingly providing false information, Levitt said. He was later released.

Rep. Speier said she wants more information about what happened, what training park rangers receive for stun-gun use and whether there are enough notices about leash rules. The National Park Service planned to answer to Speier's questions by the week's end.

The ranger remains on the job, Levitt said. Her name has not been released.