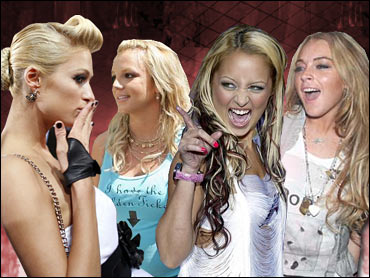 This story was written and reported The ShowBuzz's Caitlin A. Johnson.

It seems like every week some Hollywood party girl is entering rehab, going to jail or overdosing. Are they just driving themselves in to an early career grave?

Considering the way people like two-time rehabber Lindsay Lohan and jailed heiress Paris Hilton have harmed themselves by their behavior, one might think that Hollywood might quiet down for a little while.

But rumors of an eating disorder or drug problem continue to swirl around Hilton's "Simple Life" co-star Nicole Richie, who also faces possible jail-time for a DUI. "OC" star Mischa Barton was rushed to the hospital from Richie's Memorial Day party for what she said was an adverse reaction to alcohol and antibiotics. Reports have said it was really a drug overdose. After her head-shaving meltdown and stint in rehab, pop singer Britney Spears' hair is growing back, but questions about her stability remain. Photos of Lohan and MTV personality Vanessa Minnillo posing seductively with knives have also raised concerns.

Before bloggers, celebrity weeklies and 24-hour cable news networks, celebrities could short-circuit in private, and some did. Veteran Hollywood publicist Howard Bragman who recently parted ways with "American Idol" judge Paula Abdul, said he once had a client die in a bad situation. He said he has fired celebrities for being out of control and that he refuses to be "the enabler."

Matters are made worse for the famous and troubled because Bragman says the wall between public and private is nonexistent.

Photos: Paris And The Police

Perhaps more important, women like Paris, Britney and Lindsay highlight society's hypocrisy, says professor of pop culture at Bowling Green University Becca Cragin, because they "can be so celebrated, and then reviled."

"We have a lot of ambivalence about these kind of female figures in the media — our norms of femininity are fairly shallow," she said. "We expect women to be catty, materialistic, pretending to be dumber than they are — then we mock women who do those things we expect them to do."

Bragman, who represents former "Grey's Anatomy" star Isaiah Washington, says there have always been stars who behave badly, but the excess has reached new levels. Pretty soon, some will face the consequences. Lohan, he said, might be at the point were she is "uninsurable."

"They don't want to put her on movies because she's bad for business," he said.

Meanwhile, Hilton seems to have had a "jailhouse conversion." On Sunday she told Barbara Walters she would stop acting dumb. "That is no longer cute," she said from jail. Hilton doesn't quite face the same career ramifications as Lohan because as a reality star, outrageous behavior is encouraged, Bragman said. But she is starting to get older.

"This crop maybe getting long in the tooth. Paris is already 26," he said. "We can bet there will be a new crop out there ready to take their place at the velvet rope."

The question is, how long will the consumer allow the party girls to carry on. Cragin said an extreme backlash seems to be gaining steam.

"I do think that this kind of stupid girl," she said, "maybe there will be less attention to that kind of a figure in the future."