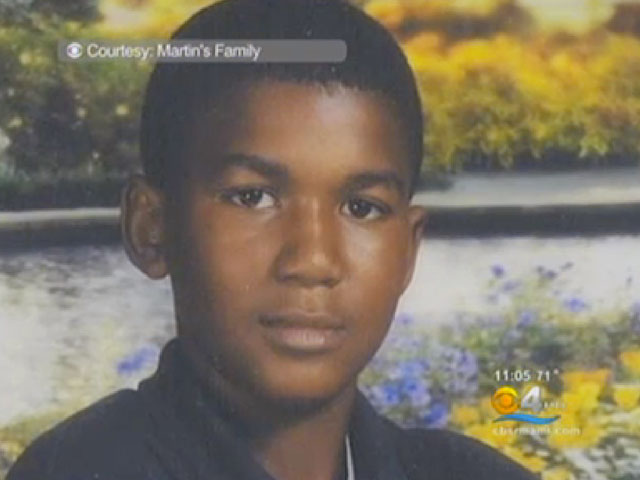 (CBS/AP) SANFORD, Fla. - The parents of teenager Trayvon Martin, a black teenager fatally shot by a neighborhood watch volunteer, called on the FBI Friday to get involved in the investigation, saying they no longer trust the local police department.

CBS This Morning reports Martin's parents say recently released 911 calls prove George Zimmerman was not acting in self-defense when he shot Martin, as he has claimed.

Zimmerman, 28, remains free. His father is defending him, saying he is not a racist and did not provoke the altercation that led to the shooting. According to the 911 tapes, Zimmerman called authorities to report Martin as a suspicious person. The operator told him police were on their way and Zimmerman did not need to follow Martin.

The teenager's father dismisses the claim of self-defense. "It can't be self-defense," says Tracy Martin. "What was he gonna do, attack him with a bag of Skittles?"

At an Orlando press conference, the parents of Trayvon Martin said they no longer trust the Sanford Police Department. Their 17-year-old son was fatally shot last month as he returned to a Sanford home during a visit from Miami.

Tracy Martin and Sybrina Fulton accused Sanford police of botching the investigation and criticized them for not arresting Zimmerman. Martin was unarmed. They say the police department hasn't arrested Zimmerman because he is white and their son was black. According to Zimmerman's father, Zimmerman is Hispanic.

"Do we really believe that if Trayvon Martin would have pulled the trigger, he would not be arrested?" said Benjamin Crump, their attorney. "This is obviously a cover-up, and we need a sweeping overhaul of the Sanford Police Department."

Sanford police Sgt. David Morgenstern said the department stands by its investigation but welcomes help from any outside agency. FBI agent David Couvertier said the agency has been in contact with Sanford police and is monitoring the case. U.S. Rep. Corrine Brown, D-Fla. and Sanford Mayor Jeff Triplett said Friday they supported federal involvement.

Florida law has a "stand your ground law," which allows wide latitude in using deadly force if someone feels reasonably threatened.

Zimmerman has not spoken to the media. State prosecutors will now decide whether he met the legal standard for the state's self-defense law, or whether he should be arrested.

The problem, explains CBS News legal analyst Jack Ford, is that only two people are known to have witnessed the incident - Zimmerman, who insists he was attacked and was only defending himself, and Martin, who was killed.

Thus, the most important thing for lawyers on both sides will be to try and find someone else who can provide some account of the altercation which ended in the fatal shooting of an unarmed teenager.