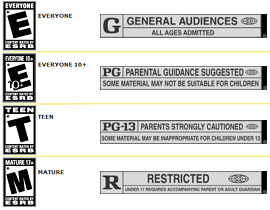 (CBS/CNET) - As a generation of gamers becomes a generation of parents, it can be tough to know where to draw the line for what constitutes appropriate interactive entertainment for children.

And if you're a parent who did not grow up in front of an Atari 2600 or Nintendo Entertainment System, it's even tougher.

Despite the fact that nearly all games carry a rating from the ESRB (Entertainment Software Rating Board), parents may not be as tuned into these ratings as they are for theatrical movies.

Fortunately, the two systems are very similar, beyond the fact that both are voluntary industry groups that exist to self-police content and keep impressionable young minds from being exposed to too much sex and violence (well, one of those, anyway).

As a simple guideline, remember that the major video game ratings roughly correspond to MPAA film ratings. It's not an exact one-to-one match, but the infographic above shows CNET's Dan Ackerman interpretation of the correlation between the two systems.

For more on this story, go to CNET News.