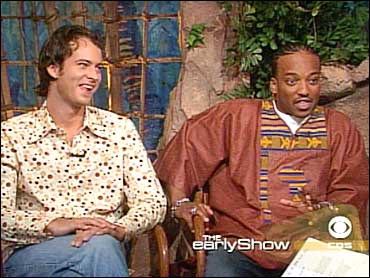 It's coming down to the wire for the five remaining "Survivor: All-Stars."

Thursday is the last regular episode before Sunday night's big finale. And on The Early Show's final Survivor Roundtable, Brandon Quinton from "Survivor: Africa" and Sean Rector from "Survivor: Marquesas" predict Rob and Amber will, for sure, be the final two.

A fan of the Red Sox, Sean is betting on Boston Rob. "Only chance Rob has to win, go Yankees. Go, Rob!"

There is a lot at stake in the final episodes of "Survivor: All-Stars."

The contestants know their marathon to the $1 million prize has turned into a heated sprint, and no one is to be trusted.

As Rupert Boneham and Jenna Lewis have a private strategy session, they are shocked to realize Robert "Boston Rob" Mariano is standing right behind them.

Rob seems to be at his manipulative best as he fuels a fiery fight between two tribe mates.

But are the "Survivor" contestants starting to see the light?

As Tribal Council looms, the five remaining "All-Stars" feel targets on their backs. And Rupert predicts, "Paranoia will destroy ya."

But Brandon says Rupert should not worry. His head will not be the one on the chopping block Thursday night. He says, "Big Tom is going to go tonight because they're going to stick with that core four. I don't care what editing shows. This is a core four alliance of Jenna, Rupert and the two love birds. Tom is the odd man out now."

Sean disagrees. "Big Tom is not a threat," he says. "Rupert is the biggest threat out of the five remaining. So they have to get rid of Rupert."

It will be up to the immunity challenge. Last week, Big Tom was a winner during the food challenge in which he along with his son treated Boston Rob and brother to the reward - a strategic move on Big Tom's part that will have great pay off at the end?

Brandon says, not quite. "Big Tom is doing exactly what he did in Africa. In the beginning, Ethan said, 'It's you and me all the way,' and he believed them. He is very gullible like that. He made an alliance and going to stick to it."

Sean notes that may be true considering what Boston Rob has done in the past, "That's indicative in the game. He made pacts from Rob C., to Alicia, and when they're on the chopping block, they realize it's a game."

So why is it that Boston Rob still has the power? "They're scared of him, for one," Brandon says.

Sean interrupts, "I don't know if they assembled the right type of type A personality. Like Lex was definitely a player. There are certain players, who would have definitely given Rob a run for his money; Kathy is another. There are a lot of players I think they're just happy to have been selected."

Brandon continues, "The players that are left are not necessarily supremely strategic. Big Tom and Jenna and Rupert are not known to be the great minds of 'Survivor' past. Not all that smart so they're going along with the flow."

As for Amber, before being voted off, Shii Ann made it clear the sweet girl was actually the one to get rid of quick.

Sean agrees, "Behind every great man, there is a great woman. We know that. So Amber is definitely playing." Pulling the puppet strings? "That may be," Sean says, "But like on our season with Neleh and Vecepia. When it comes down to who is playing the game, they remember who played, not who rode coattails."

Well, not quite, Brandon says, "Amber is playing harder than anybody. She's convinced Boston Rob to be the bad guy. She is playing bad cop/good cop."

"Survivor: All-Stars" airs Thursday at 8 p.m. ET/PT, 7 p.m. CT, on CBS. The latest contestant sent packing will be a guest Friday morning on The Early Show. And the season's live finale will be Sunday.