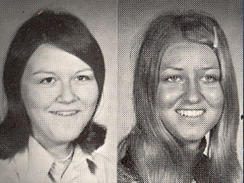 (AP) ELK POINT, S.D. - Authorities say skeletal remains were found in an old Studebaker believed to be tied to the 1971 disappearance of two 17-year-old girls, Cheryl Miller and Pamella Jackson

Crews lifted the rusted, mangled hulk from an embankment in Brule Creek near Elk Point, S.D. on Tuesday afternoon.

State and local agency leaders say some potential pieces of evidence have been taken from the site and will be processed.

They say no other information will be released until an autopsy and more testing is done and the families are told of the results.

Investigators say they think the car was driven by teens Miller and Jackson, who were last seen May 29, 1971, driving a beige 1960 Studebaker Lark on their way to a party.

A fisherman called authorities after noticing one of the car's wheels.

A man already serving a prison sentence on unrelated charges was indicted for murder in the deaths of Miller and Jackson in 2007, but the charges were dropped after prosecutors found out that a supposed confession given to a fellow inmate was faked.

The disappearance of the Vermillion High School juniors was one of the initial investigations of South Dakota's cold case unit, which was formed in June 2004 to focus on unsolved suspicious deaths and disappearances, because there's no time limit on filing criminal charges in homicide cases.

A September 2004 search of a Union County farm turned up bones, clothing, a purse, photographs, newspaper articles and other items, but not the car. Authorities have never said if those bones belonged to the girls - or if they were even human remains.

In a warrant authorizing the search, authorities said that David Lykken, who lived at the farm in 1971, might have been involved in the disappearance of Miller and Jackson as well as three other unnamed people. Lykken, 59, is prison serving an unrelated 227-year sentence for rape and kidnapping.

In July 2007, a Union County grand jury indicted Lykken on two counts of premeditated murder, two counts of felony murder and two counts of murder in the disappearance of Miller and Jackson. He was arrested at the prison and scheduled for a March 2008 trial, but state prosecutors dropped all six murder charges after discovering a prison snitch made up a supposed admission.

Complete coverage of the Studebaker cold case case on Crimesider