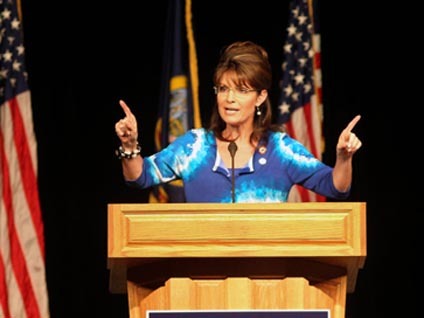 This commentary was written by CBSNews.com Editor-in-Chief Daniel Farber.

"The current administration may be unaware that it's the President's duty, meeting on a CEO-to-CEO level with Hayward, to verify what BP reports," Ms. Palin sniped, citing her experience as an oil regulator and then as a governor.

In his interview with NBC's Matt Lauer, Mr. Obama explained his approach to managing the disaster in the Gulf, where he was not highly visible during the first month of the disaster. "I don't sit around just talking to experts because this is a college seminar. We talk to these folks because they potentially have the best answers, so I know whose ass to kick," he said.

Ms. Palin wants him to kick Tony Hayward's ass. However, the BP CEO doesn't work for the White House, so the president cannot fire him, as he said he would if he were on his staff. Nor is he a Putin or Wen Jiabao.

Mr. Obama has been out of tune in making his personal presence felt on the Gulf Coast, but having a face-to-face with Tony Hayward isn't going to stop the leak or change perceptions of how the White House is handling the disaster.

Ms. Palin stands by her "Drill, baby, drill" cry, but said that the government must regulate oil development and hold oil executives accountable or "we will be even more beholden to, and controlled by, dangerous foreign regimes that supply much of our energy." It's a little more inflammatory but not much different from what the president has said, sans the appeal to focus more on alternative energy sources.

In the Facebook note she brought up executive experience, referencing the presidential campaign in which she compared her executive skills as a governor of what she called "the largest state in the union" to Mr. Obama's experience as a community organizer.

"My experience (though, granted, I got the message loud and clear during the campaign that my executive experience managing the fastest growing community in the state, and then running the largest state in the union, was nothing compared to the experiences of a community organizer) showed me how government officials and oil execs could scratch each others' backs to the detriment of the public, and it made me ill. I ran for Governor to fight such practices. So, as a former chief executive, I humbly offer this advice to the President: you must verify. That means you must meet with Hayward. Demand answers," she wrote.

Ms. Palin also advised the president to meet with people from Alaska's Department of Natural Resources, and added with a flourish, "Or, what the heck, give me a call."

In the incredibly unlikely event that Mr. Obama did give Ms. Palin a call, the conversation wouldn't impact the Gulf spill outcome any more than if Mr. Obama talked to beleaguered Tony Hayward, who just wants to get his life back, as Ms. Palin did when she resigned from her job as governor of the big oil state Alaska.