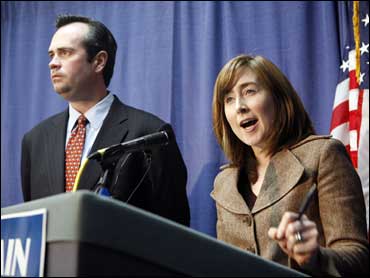 Less than a week after balking at the Alaska Legislature's investigation into her alleged abuse of power, Gov. Sarah Palin on Monday indicated she will cooperate with a separate probe run by people she can fire.

An attorney for the GOP vice presidential nominee met with an investigator for the state Personnel Board to discuss sharing documents and schedule witness interviews, McCain spokeswoman Meg Stapleton said. Neither she nor McCain spokesman Ed O'Callaghan had further details about the meeting and said they did not know if the governor or her husband would be interviewed.

Palin attorney Thomas Van Flein said in an e-mail that information on who will be interviewed and when will be known on Tuesday. He said additional coordination meetings with the investigator, Anchorage attorney Timothy Petumenos, are likely.

After that, however, Petumenos wants to keep the progress of the investigation confidential and the campaign will not have any further comment, McCain spokesman Taylor Griffin said.

Both the Legislature and the personnel board have hired investigators in separate inquiries of whether Palin abused her power when she fired Public Safety Commissioner Walt Monegan this summer. Monegan refused to dismiss a state trooper who went through a bitter divorce with her sister before Palin's became governor.

Palin has refused to participate in the Legislature's investigation since becoming Sen. John McCain's running mate.

The other investigation is overseen by the state Personnel Board, a three-member panel appointed by the governor. Panel members can be fired by the governor for cause. Two members are holdovers from the previous governor and Palin reappointed the third.

Van Flein said that does not mean she can fire the members if she is displeased with the investigation. Citing a state attorney general's opinion, he said a board member must have committed wrongdoing or failed to do their duty.

Two personnel board members are holdovers from the previous governor and Palin reappointed the third.

Separately, two Alaska Democrats urged state police to investigate why subpoenaed witnesses, including Palin's husband, did not testify before the legislative committee last week. The lawmakers, Rep. Les Gara and Sen. Bill Wielechowski, said state law bars witness tampering, but that they did not have enough information to file a formal complaint in the case.

Griffin said the campaign has not advised any witnesses on how to respond to subpoenas.