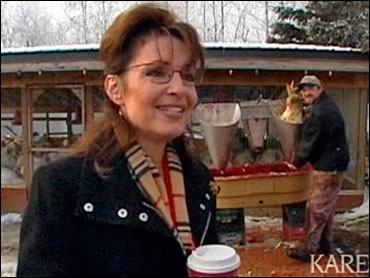 Gov. Sarah Palin has granted the traditional Thanksgiving pardon to one lucky turkey, but the video that shocked some viewers captured what was happening in the background.

As she answered questions Thursday at Triple D Farm & Hatchery outside Wasilla cameras from the Anchorage Daily News and others showed the bloody work of an employee slaughtering birds behind the former Republican vice presidential candidate.

On the video, Palin didn't comment about the slaughter as she answered questions, saying she's thankful that her son's Stryker brigade is relatively safe in Iraq and the rest of her family is healthy and happy. She said she's glad to be back in Alaska.

"This was neat," she said of the outing. "I was happy to get to be invited to participate in this. For one, you need a little bit of levity in this job, especially with so much that has gone in the last couple of months that has been so political obviously that it's nice to get out and do something to promote a local business and to just participate in something that isn't so heavy-handed politics that it invites criticism. Certainly we'll probably invite criticism for even doing this, too, but at least this was fun."

You can watch the video from the Anchorage Daily News below (warning: graphic content):