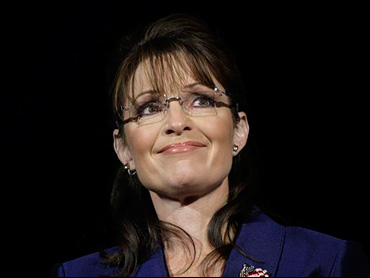 Alaska Gov. Sarah Palin, amid speculation she'll run for president in four years, blamed Bush administration policies for the defeat last week of the GOP ticket and prayed she wouldn't miss "an open door" for her next political opportunity.

"I'm like, OK, God, if there is an open door for me somewhere, this is what I always pray, I'm like, don't let me miss the open door," Palin said in an interview with Fox News on Monday. "And if there is an open door in '12 or four years later, and if it is something that is going to be good for my family, for my state, for my nation, an opportunity for me, then I'll plow through that door."

In a wide-ranging interview with Fox's Greta Van Susteren, Palin says she neither wanted nor asked for the $150,000-plus wardrobe the Republican Party bankrolled, and thought the issue was an odd one at the end of the campaign, considering "what is going on in the world today."

"I did not order the clothes. Did not ask for the clothes," Palin said. "I would have been happy to have worn my own clothes from Day One. But that is kind of an odd issue, an odd campaign issue as things were wrapping up there as to who ordered what and who demanded what."

"It's amazing that we did as well as we did," Palin, who was Sen. John McCain's running mate, said of the election in a separate interview with the Anchorage Daily News.

Palin has scheduled a series of national interviews this week with Fox, NBC's "Today" show and CNN. She also plans to attend the Republican Governors Association conference in Florida this week.

Palin has been mentioned as a possible presidential candidate in 2012. She also could seek re-election in 2010 or challenge Sen. Lisa Murkowski. Still uncertain is the fate of Sen. Ted Stevens, who is leading in his bid for another term but could be ousted by the Senate for his conviction on seven felony counts of failing to report more than $250,000 in gifts, mostly renovations on his home. If Stevens loses his seat, Palin could run for it in a special election.

Palin and McCain's campaign faced a storm of criticism over the tens of thousands of dollars spent at such high-end stores as Saks Fifth Avenue and Neiman Marcus to dress the nominee. Republican National Committee lawyers are still trying to determine exactly what clothing was bought for Palin, what was returned and what has become of the rest.

Her father, Chuck Heath, said Palin spent part of the weekend going through her clothing to determine what belongs to the Republican Party.

"She was just frantically ... trying to sort stuff out," Heath said. "That's the problem, you know, the kids lose underwear, and everything has to be accounted for. Nothing goes right back to normal,"

Palin's father said his daughter told him the only clothing or accessories she personally had purchased in the past four months was a pair of shoes.

RNC lawyers have been discussing with Palin whether what's left of the clothing and accessories purchased for her on the campaign trail will go to charity, back to stores or be paid for by Palin, a McCain-Palin campaign official said Friday, speaking on condition of anonymity because the campaign hadn't authorized comment.

The McCain-Palin campaign said about a third of the clothing was returned immediately because it was the wrong size, or for other reasons. However, other purchases apparently were made after that, the campaign official said.

In Wasilla, her hometown backers welcomed her, putting aside their disappointment over her unsuccessful bid.

Jessica Steele can't wait to see what Sarah Palin does next - not with her political career, but with her hair.

"That's something I want to talk to her about: What's our vision for her hair?" says Steele, proprietor of the Beehive Beauty Shop and keeper of the governor's up-do since 2002. "I can't wait to see her and say, 'OK, I've got you alone for three hours. Just relax, and how are you, really?"'

While Palin remains popular, the reality of defeat is evident.

Bags of fan mail, as many as 400 letters a day, partially fill a room at her parent's house. But parents no longer meet Secret Service agents when they pick up their children at Cottonwood Creek Elementary, where Palin's youngest daughter, Piper, is a student. The reporters and camera crews are gone from the Palin home on Lake Lucille, once patrolled by Coast Guard boats. Now a thick sheet of ice covers the lake.

And in a bit of familiarity, Heath said he brought a pot of moose chili to Palin's house this past weekend.