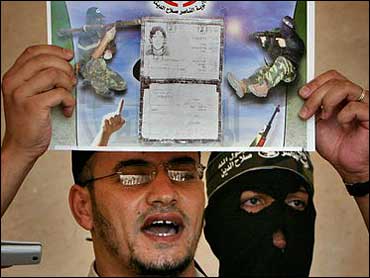 Israel sent tanks into northern Gaza and arrested the Palestinian deputy prime minister and dozens of other Hamas government officials early Thursday, escalating its response to the abduction of one of its soldiers.

The moves came after thousands of troops moved into southern Gaza Wednesday and Israeli warplanes roared over the summer home of Syria's president, who is blamed for harboring Hamas leaders.

Palestinian witnesses said Israeli tanks and bulldozers entered northern Gaza before daybreak Thursday, adding a second front to the Israeli action in Gaza. The Israeli military had no comment on the latest incursion.

No deaths or injuries were reported in the Israeli actions so far. But the warplanes knocked out Gaza's electric power plant, raising the specter of a humanitarian crisis. The Hamas-led government warned of "epidemics and health disasters" because of damaged water pipes to central Gaza and the lack of power to pump water.

Gaza City is one of the most densely populated cities on the planet and hundreds of thousands of people are living in the dark, reports CBS News correspondent Sheila MacVicar.

Increasing pressure on Hamas within the Palestinian territories, Israeli forces arrested more than 30 lawmakers, according to Palestinian security officials. Among those detained were Palestinian Deputy Prime Minister Nasser Shaer, Labor Minister Mohammed Barghouti and two other ministers in the West Bank. They security officials said two others were arrested in the town of Jenin, and Israeli media reported a roundup of Hamas lawmakers in Jerusalem and other locations.

Although the Israeli action was sparked by the abduction of the soldier, Israeli Prime Minister Ehud Olmert's government also is alarmed by the firing of homemade rockets on Israeli communities around Gaza and support for Hamas in the Arab world, especially from Syria.

In a clear warning to Syrian President Bashar Assad, Israeli airplanes flew over his seaside home near the Mediterranean port city of Latakia in northwestern Syria, military officials confirmed, citing the "direct link" between his government and Hamas. Israeli television reports said four planes were involved in the low-altitude flight, and that Assad was there at the time.

As CBS 60 Minutes correspondent Bob Simon reports, the violence is part of the typical pattern of Middle East violence. Simon reports that the kidnapping "is designed to provoke a brutal Israeli response. The Israeli's follow suit with that response. The response invariably radicalizes the population, makes them even more anti-Israeli – creates mores suicide bombers."

The area's normally bustling streets were eerily deserted, with people taking refuge inside their homes.

Witnesses reported heavy shelling around Gaza's long-closed airport, which Israeli troops took over. Dozens of people living near the airport fled to nearby Rafah.

In Rafah, Nivine Abu Shbeke, a 23-year-old mother of three, hoarded bags of flour, boxes of vegetables and other supplies. "We're worried about how long the food will last," she said. "The children devour everything."

Prior to the latest incursion into northern Gaza, the Israeli army dropped leaflets warning residents of impending military activity.

Dozens of Palestinian militants — armed with automatic weapons and grenades — took up positions, bracing for the attack.

Anxious Palestinians pondered whether the incursion, the first large-scale ground offensive since Israel withdrew from Gaza last year, was essentially a "shock and awe" display designed to intimidate militants, or the prelude to a full-scale invasion.

Olmert threatened harsher action, though he said there was no plan to reoccupy Gaza. Palestinian President Mahmoud Abbas deplored the incursion as a "crime against humanity."

The Israeli assault came as diplomatic efforts to free the 19-year-old Israeli soldier, Cpl. Gilad Shalit, bogged down with Hamas demanding a prisoner swap and Israel refusing, demanding Shalit's unconditional release. Shalit was abducted by Hamas-linked militants on Sunday and is believed to be in southern Gaza.

"We won't hesitate to carry out extreme action to bring Gilad back to his family," Olmert declared.

Abbas and Egyptian dignitaries urged Assad to use his influence with Khaled Mashaal, the Hamas leader exiled in Syria, to free Shalit. Assad agreed, but without results, said a senior Abbas aide.

As for Mashaal, Israeli Justice Minister Haim Ramon said the hard-line Hamas leader, who appears to be increasingly at odds with more moderate Hamas politicians in Gaza, is in Israel's sights for assassination.

"Khaled Mashaal, as someone who is overseeing, actually commanding the terror acts, is definitely a target," Ramon told Army Radio.

Israel tried to kill Mashaal in a botched assassination attempt in Jordan in 1997. Two Mossad agents injected Mashaal with poison, but were caught. As Mashaal lay in a Jordanian hospital, King Hussein of Jordan forced Israel to provide the antidote in return for the release of the Mossad agents.

The United Nations and European Union on Wednesday urged both Israel and the Palestinians to step back from the brink and, echoing a statement from Secretary of State Condoleezza Rice, to give diplomacy a chance.

The White House kept up its pressure on Hamas, saying the Palestinian government must "stop all acts of violence and terror." But the U.S. also urged Israel to show restraint.

"In any actions the government of Israel may undertake, the United States urges that it ensures that innocent civilians are not harmed, and also that it avoid the unnecessary destruction of property and infrastructure," said White House press secretary Tony Snow.

U.N. Secretary-General Kofi Annan urged restraint in a phone call to Olmert, saying he had spoken with Assad and Abbas and asked them to do everything possible to release the soldier. Arab League Secretary-General Amr Moussa called on the U.S. to assume its role as "honest broker" and to make the Palestinian-Israeli conflict its top priority in the Middle East.

Hamas' negotiators' tentative acceptance Tuesday of a document that Abbas allies claimed implicitly recognizes Israel appeared beside the point a day later, with Israel saying no political agreement can substitute for Shalit's freedom.

Gaza's economy was already in the doldrums before the Israeli assault, a result of five years of Israeli-Palestinian violence and an international aid boycott that followed Hamas' parliamentary election victory in January. The Israeli assault threatened to turn a bad situation into a disaster — underscoring the extent to which hopes have been dashed following the optimism that accompanied Israel's pullout.

Palestinian plans for high-rise apartments, sports complexes and industrial parks in lands evacuated by Israel have given way to despair, with rising poverty, increasingly violent relations with Israel and a looming threat of civil war.