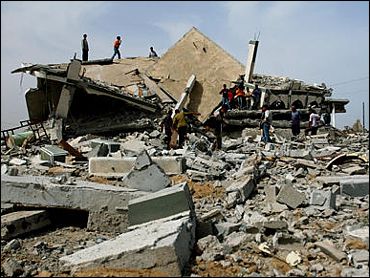 The Palestinian Authority decided Monday to hold its first-ever municipal elections and appealed for international help in setting a date for general elections, in an attempt to restore the legitimacy of Palestinian leaders.

Meanwhile, Israeli troops demolished 13 Palestinian homes along a road for Jewish settlers in the Gaza Strip. CBS News Correspondent Robert Berger reports the army said the homes were used as cover by Palestinian gunmen targeting the settlers. A week ago, gunmen killed a pregnant Israeli and her four young daughters on the road, and on Sunday, settlers attending a memorial for the slain family came under a hail of fire on the same road.

Authorities also say a suicide bomb attack slated for Tel Aviv was thwarted with the arrest of a Palestinian woman. Palestinian reports quoted by the Jerusalem Post say the would-be bomber is a hermaphrodite who goes by the name of Ahmed. Security forces arrested Amal Juma'a, 35, in the Askar refugee camp near Nablus on Sunday night.

Israeli Prime Minister Ariel Sharon has cancelled a trip to Washington set for next week, after his plan for a unilateral Israeli withdrawal from the Gaza Strip suffered a landslide defeat in a referendum.

Sharon said he would come up with a new Gaza withdrawal plan in three weeks, but hawks like Cabinet minister Natan Sharansky say they won't accept any plan to dismantle Jewish settlements.

"The new ideas and new proposals that have to be brought should not deal with one-sided concessions," Sharansky said.

The head of another hard-line party, the National Union, also said it would oppose any evacuations, and said there was "no point" in formulating a diplomatic plan prior to the American presidential election in November.

Sharon said Monday that he "respects" the outcome of the Likud party vote, but said he would not drop the idea of a withdrawal. He had defended his plan as the best way to get security for Israelis in the absence of peace moves.

The local Palestinian elections will be held in stages, with the first voting to take place in the West Bank town of Jericho by the end of August, followed by elections in Gaza Strip municipalities, Local Affairs Minister Jamal Shobaki said.

The Cabinet decision did not link local elections to an Israeli withdrawal from Palestinian towns, removing a major obstacle.

However, Prime Minister Ahmed Qureia reiterated Monday that legislative and presidential elections would only be held once Israeli soldiers have withdrawn from all Palestinian population centers.

Qureia said he would ask the so-called quartet of mediators — the United States, Russia, the United Nations and the European Union — to come up with a date for general elections, apparently as a way of prodding Israel to withdraw troops and remove roadblocks. Qureia is to meet next week in Berlin with U.S. National Security Adviser Condoleezza Rice.

The push for new elections was an effort to counter Israel's claim that it has no Palestinian negotiating partner. With peace efforts stalled, Sharon is pushing for a unilateral withdrawal from Gaza and parts of the West Bank, a plan that irked Palestinian officials, who watched the fate of their people being decided without their input.

A United Nations envoy said Monday that any Israeli withdrawal from the Gaza Strip must mark an end of the occupation there and be carried out as part of a comprehensive peace that includes Syria and Lebanon.

"This (Gaza withdrawal) has to take place within the broader framework of the peace process in the region encompassing all tracks, including of course the Lebanese and Syrian track," said Terje Roed-Larsen, the top Mideast envoy of U.N. Secretary-General Kofi Annan.

Peace talks between archenemies Syria and Israel broke down in January 2000 over the extent of an Israeli withdrawal from the Syrian Golan Heights, a strategic plateau Israel occupied in the 1967 Mideast war and later annexed. The Lebanese government has said it will be the last Arab country to sign a peace treaty with Israel.

The decision to hold municipal elections comes amid increasing lawlessness and corruption in Palestinian towns. During full Israeli military rule, municipal elections were held in the West Bank in 1976, but not in the Gaza Strip. Since the Palestinian Authority took charge in the mid-1990s, it has appointed the local officials.

The last Palestinian elections for president and the legislature were held in 1996. New elections were supposed to have been held in 2001, but were postponed after the outbreak of Israeli-Palestinian violence.

"We need general elections," Qureia said. "We cannot set a date because of the occupation. We will call on the Quartet to suggest or propose a new date so we can put an end to (people saying) there ... is no partner (for peace)."

Yasser Arafat has been reluctant to agree to holding local elections, for fear opposition groups, including the Islamic militant Hamas, would win. However, advisers have been pressing him to relent, saying dissatisfaction among ordinary Palestinians is becoming increasingly disruptive, according to officials close to the Palestinian leader.