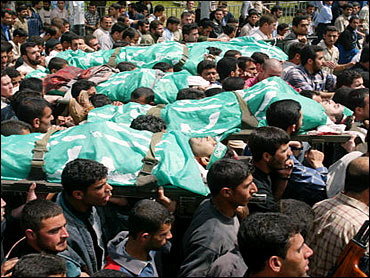 Firing rifles into the air and hoisting bodies over their heads, tens of thousands of Palestinians filled the streets Friday to mourn 12 people killed in an Israeli raid, and warned their new prime minister against any attempts to disarm militants.

"No to Abu Mazen!" they chanted angrily, lashing out against Prime Minister Mahmoud Abbas, who was sworn in two days earlier with a promise to crack down on the militants and work for the success of a new internationally backed Mideast peace plan.

Thursday's raid came a day after a suicide attacker killed three people in Tel Aviv. Palestinian officials and Israeli opposition leaders have accused Prime Minister Ariel Sharon of using the raid to undercut Abbas before he has a chance to confront violent Palestinian groups — a key element of the plan.

Israeli media quoted a senior army officer Friday as saying the suicide bombing was probably planned outside Israel. The report said the bomb was apparently put together abroad as well.

The revelation raised questions about a possible lapse in border security and intensified fears that foreign terrorists are infiltrating Israel. Israeli officials have confirmed the bomber and his would-be accomplice were British citizens.

The swearing-in Wednesday of Abbas, who is also known as Abu Mazen, led to the unveiling of an internationally backed "road map" to peace and sparked hopes for an end to 31 months of violence.

Instead, there was more bloodshed. The Tel Aviv bombing, claimed jointly by the Islamic militant Hamas group and the Al Aqsa Martyrs' Brigade, was followed Thursday by an Israeli raid into a Gaza City neighborhood to arrest a top Hamas bomb maker. The incursion set off a fierce gunbattle that killed 13 Palestinians, among them eight gunmen and five civilians, including boys ages 2, 13 and 15.

The deaths have galvanized many in Gaza against the latest peace plan.

"Where is Abu Mazen, to come and see the real choice of the people?" asked Raouf Tulan, a 27-year-old construction worker and Hamas supporter whose cousin was killed. "It's the choice of everyone in Palestine to go the distance until victory."

Sheik Ahmed Yassin, the quadriplegic leader of Hamas who watched the massive funeral procession from a distance, said the group would order more suicide bombings, which already have killed hundreds of Israelis. "Resistance, all types of resistance, will continue in the West Bank, in Gaza and in the occupied land of 1948," he said, referring to Israel.

Friday's march was the biggest show of force by militant groups in nearly a year. Like a drumbeat, hundreds of gunmen popped rifle shots into the air as others bore stretchers carrying bodies of the dead on the way to graves. The crowd stretched for nearly two miles in central Gaza City.

Along the fence between Gaza and Israel, troops on Friday discovered and detonated a 200-pound bomb, the army said. The bomb was found near the Israeli village of Nahal Oz.

Israeli Defense Minister Shaul Mofaz, visiting soldiers wounded during Thursday's raid, said the incursion into Gaza was necessary because it was an attempt to root out Hamas leaders.

The recent violence — and the intense opposition by Palestinian militants to their new prime minister — did not provide an auspicious start for the new peace plan, which aims to achieve Palestinian statehood within three years.

Abbas has accepted the blueprint, but Israel has asked for more than a dozen changes, including making a Palestinian crackdown on terror groups the condition for any progress, and for a Palestinian recognition of Israel's right to exist as a Jewish state.

Phase I of the road map calls for a simultaneous Palestinian crackdown on terror groups and an Israeli freeze on Jewish settlements in the West Bank and Gaza Strip.

In an interview with the Israeli newspaper Yediot Ahronot, President Bush's national security adviser, Condoleezza Rice, urged both sides to end fighting and siphon some momentum for change from the fall of Iraq's Saddam Hussein.