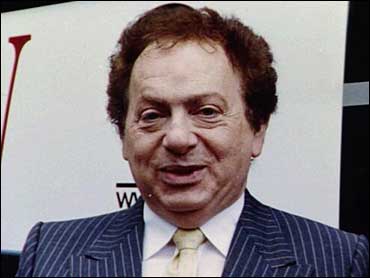 A Chicago comedian scheduled to open for comic Jackie Mason was told hours before the show he couldn't perform because he is of Palestinian descent, Mason's manager said.

Ray Hanania, a 49-year-old fledgling comic, was supposed to open for Mason's Tuesday night show at Zanie's comedy club in Chicago. Instead, the club phoned him a few hours before to tell him his act was canceled.

"It's not exactly like he's just an Arab-American. This guy's a Palestinian. We were not told about it ahead of time," said Jyll Rosenfeld, Mason's manager. "Jackie does not feel comfortable having a Palestinian open for him. Right now it's a very sensitive thing, it's just not a good idea."

Mason, who has appeared on Broadway and in films such as "Caddyshack II" and "The Jerk," has been an outspoken member of the Jewish community. He supports Israel and has received at least one award from the Israeli government.

"Nothing personal against this fellow," Rosenfeld said. "Jackie doesn't even know him."

But members of Chicago's Arab-American community did take it personally.

As the one-year anniversary of the Sept. 11 terrorist attacks approaches, Americans should be doing more to unite, said Ali Alarabi, president of the United Arab American League.

"I'm outraged," Alarabi said. "It is an act of hate and racism against Palestinians, and we demand an apology."

"Don't turn this into a racist issue, because it's not," Rosenfeld said. "We just felt this is not a good idea at this time."

Hanania said he has been a comedian for less than a year and has about 20 performances under his belt. He started performing after Sept. 11 in an effort to lighten the situation and bring people together, he said.

"I'm upset because I deserve to be on stage and it was a big break for me," Hanania said.

Zanie's General Manager Linda Moses said Hanania's inexperience contributed to the cancellation. She said Hanania was replaced by a comic who has opened for Mason several times in the past.

"It's just the fact that he is an unknown," Moses said. "(Mason) is just not comfortable with having an unknown act. It's understandable."

In cases like this, the club must defer to Mason's wishes, Moses said.

Hanania, a Vietnam War veteran and former reporter, said he believes the decision should be based on how funny and entertaining he is. He said that if the decision was simply that he is a "lousy comedian," then he would be satisfied.

"We're coming up to the anniversary of Sept. 11, and we should be bringing people together," Hanania said. "We continue to fall into the trap of pushing people apart."