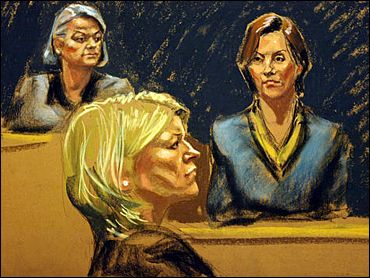 It was a very interesting last 20 minutes in court Thursday, as one of Martha Stewart's closest friends was called to the stand to testify.

It may have been the most damaging testimony yet against the homemaker mogul, reports CBS News Correspondent Gretchen Carlson.

It's the heart of the government's case against Martha Stewart. Did she know Imclone CEO Sam Waksal sold his shares in the company just days before she sold hers? Mariana Pasternak — a close friend of Stewart for more than 20 years — testified that Stewart told her about the Waksal sale while they were vacationing in Mexico at the end of 2001.

Pasternak said Stewart recalled Waksal "was selling or trying to sell his stock" and that Stewart added, "Isn't it nice to have brokers who tell you those things?"

Defense attorneys will cross-examine Pasternak Friday, reports CBS News Correspondent Cami McCormick. The last two witnesses for the prosecution are likely to be friends of prosecution star witness Douglas Faneuil. They're expected to testify the former Merrill Lynch broker's assistant knew when he tipped off Stewart to sell her ImClone stock that what he was doing was wrong, but he felt pressured by his boss, and Stewart's codefendant, Peter Bacanovic.

While Pasternak's testimony appears to be damaging to Stewart, some legal observers question whether it was hearsay.

"I do not believe the scope the nature and the lack of specificity in this witness really tied any of the more serious criminal charges to Ms. Stewart," attorney and observer Frances Scanlon told CBS News.

ImClone shares tumbled shortly after Stewart sold her shares on news that the Food and Drug Administration would not review ImClone's application for approval of its highly touted cancer drug, Erbitux.

While Stewart is not charged with knowing about the drug review, she told investigators in 2002 she did not recall being told anything about Waksal trying to sell his ImClone stock.

Waksal, a friend of both Stewart and Pasternak, is serving a seven-year prison sentence for insider trading. He and his family frantically sold, or tried to sell, their shares ahead of the drug announcement.

Earlier Thursday, a Secret Service forensics expert testified a notation of "@60" on a worksheet Bacanovic used to track Stewart's portfolio had been made in a different ink than other marks on the sheet.

Larry Stewart, considered the nation's top ink expert, said infrared and ultraviolet light tests had confirmed differences between the "@60" entry and other marks. The forensic scientist is no relation to Martha Stewart.

The worksheet, among the most critical pieces of government evidence, is a summary of gains and losses in 36 stocks Stewart owned in late 2001 at Merrill Lynch & Co.

Bacanovic made circles, check marks and other notations in blue ink on the document. The "@60" mark, also in blue ink, is underlined and appears next to an entry for Stewart's 3,928 shares of ImClone.

"It looks very suspicious when you have one ink used throughout the document and then on only one item, there is a different ink," John Jay College forensics expert Lawrence Kobilinsky told CBS News. "Sure there could be innocent circumstances but it raises questions."

Under cross-examination, the ink expert said it was impossible to tell how many pens had been used to mark on the document. Bacanovic's team contends he simply used different pens in his work.