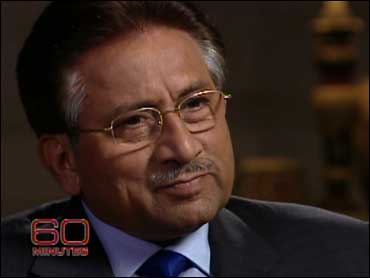 Leaders of Pakistan's Islamic political parties are threatening to launch fresh protests against the country's military ruler General Pervez Musharraf following his claim in a "60 Minutes" interview that former U.S. Deputy Secretary of State Richard Armitage threatened to bomb Pakistan "back to the Stone Age."

On Friday, U.S. President George W. Bush said that he was taken aback when he heard the claim, while Mr. Armitage denied he had ever threatened the use of military action against Pakistan if it refused to join the U.S.-led war on terror after the Sept. 11 terrorist attacks.

On Monday, General Musharraf's book will be launched in New York. The memoir reviews his experiences over the past five years and is expected to include his version of the exchange between Mr Armitage and Lieutenant General Mahmood Ahmed, the former chief of Pakistani intelligence.

General Ahmed was visiting the United States on the day of the 9/11 attacks and immediately afterwards met with U.S. officials. To this day, the full details of General Ahmed's meetings and accounts of what was discussed, have not been revealed publicly. But Pakistani and western officials have said that General Ahmed's presence in the U.S. helped the Bush administration to quickly convey the urgency of the situation to General Musharraf, prompting Pakistan to agree to join the U.S.-led war on terror.

In Pakistan, Hafiz Hussain Ahmed, a senior leader of the coalition of Islamic parties known as the Muttahida Majlis-e-Amal (MMA) said on Saturday that his group would seek a detailed parliamentary discussion on U.S.-Pakistan relations when the parliament's next session takes place. "I am amazed that it has taken General Musharraf five years to publicly reveal this exchange with Armitage. It is humiliating that our own parliament did not get to hear this first-hand account. This account came out while Musharraf was in the U.S. Didn't we as Pakistanis deserve to hear this first?" he said in an interview with CBS News. "Armitage's remarks underline the issue that America has no respect for Muslims or governments of Islamic countries," he added.

Asadullah Bhutto, a leader of the largest Islamic party known as the 'Jamaat-e-Islami' told CBS News that General Musharraf's claim "confirms what we have said all along is true. This is simply the point that the U.S. relationship with Pakistan is not that of one country being the friend of another. The Americans simply treat Pakistan like a client state – an employee who is ordered about."

Most analysts believe that the fallout from the controversy does not pose an immediate threat to General Musharraf's government. But there were also warnings that the controversy promises to solidify Pakistan's rising opposition to the ruling regime. "Parties like the MMA have said for long, Musharraf has compromised on Pakistan's vital interests, he has conceded more ground to the Americans than any other leader in this country's history," Hasan Askari Rizvi, a leading Pakistani commentator on security and national affairs told CBS News. Mr Rizvi said, General Musharraf's claim would harden "anti-Americanism and unite those who oppose ties to the U.S. This threat of being bombed back to the Stone Age is not going to be taken lightly by many people," he added.

Former Pakistani officials who dealt with the U.S. while Mr Armitage was still in office described him as a tough negotiator. "There were rumors that in his first meeting with Lieutenant General Mahmood Ahmed, Armitage conveyed a very tough message, but the exact wording has never before been revealed," said a former Pakistani government official who spoke to CBS News on the condition that his name would not be revealed.

Bull-necked, a weight-lifter and a veteran of the Vietnam war, Mr Armitage left many Pakistani officials with the impression of being unusually blunt. "He is not your usual diplomat type who speaks in a diplomatic language. When Armitage spoke, you knew this was not a man given to delivering messages between the lines. He is a straight talker," added the former Pakistani official.