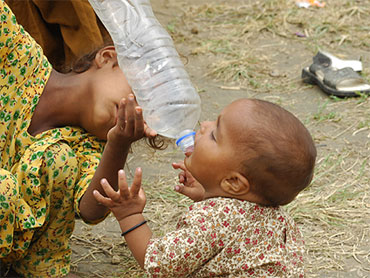 Pakistani flood survivors already short on food and water began the fasting month of Ramadan on Thursday, a normally festive, social time marked this year by misery and fears of an uncertain future.

The U.S. announced a navy ship with 19 helicopters and 1,000 Marines on board was close to the southern coast of the country and relief flights would soon begin. The U.N. launched an emergency appeal for international assistance for Pakistan after the already-poor nation was hit with one of its worst-ever natural disasters.

Damage to crops, roads and bridges have caused food prices to triple in some parts of the country, adding to the pain of those marking the fasting month.

"Ramadan or no Ramadan, we are already dying of hunger," said Mai Hakeema, a 50-year-old who sat alongside her ailing husband in a tent outside the city of Sukkur. "We are fasting forcibly, and mourning our losses."

Observant Muslims fast from dawn to dusk each day for a month each year to control their desires and show empathy for the poor. The month is marked by increased attendance at mosques, a rise in charitable giving and family gatherings that coincide with the evening breaking of the fast.

While millions of flood-affected people were performing the fast, Mufti Muneebur Rehman, one of the country's top religious scholars, said victims living in difficult conditions dependent on charity could skip the fast and perform later in the year.

"I am sad to miss the first day of fasting," said Ghullam Fareed of Gormani village in eastern Punjab province. "Later, when we reach home, we will compensate for this."

In the northwest, where many are especially devout, many refugees said flood or no flood, they would fast.

"I cannot disobey God, so I am fasting as it is part of my faith no matter what the conditions are," said Fazal Rabi, 47, who was staying in a tent village in Akbarpura.

The floods hit the country more than two weeks ago, beginning in the northwest before spreading down the country and inundating thousands of villages. Around 1,500 people have been killed, and the U.N. estimates up to 7 million people need emergency assistance.

On Wednesday, the U.N. appealed for $460 million to provide immediate help, including shelter, food, clean water, sanitation and medical care.

"Make no mistake, this is a major catastrophe," U.N. humanitarian chief John Holmes told diplomats from several dozen countries in launching the appeal in New York. "We have a huge task in front of us. The death toll has so far been relatively low compared to other major natural disasters, but the numbers affected are extraordinarily high."

The United States said it was more than doubling the number of helicopters it is providing to help.

Defense Secretary Robert Gates said the USS Peleliu was off the coast near Karachi, carrying 19 helicopters and a complement of about 1,000 Marines. The helicopters will help rescue people and deliver food and other supplies.

The Pakistani government's response to the crisis has been criticized by many as too slow and patchy, and the civilian leaders have struggled to rally public opinion in their favor.

"We will try our best to reach millions of people to ensure that they get food and other basic items during and after the month of Ramadan," he said while aboard a military plane.