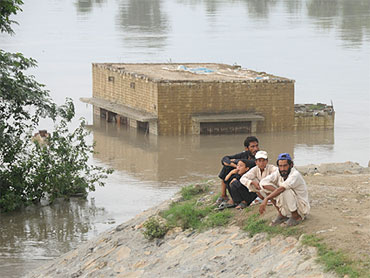 This story was filed by CBS News' Farhan Bokhari.

Volunteers from the Al-Khidmat foundation handed out food packets stuffed with flour, sugar and tea leaves, while promising to swiftly bring in doctors and medicines for victims of Pakistan's worst-ever disaster.

At this distribution point (at left) outside the northern city of Nowshera, in the Khyber-Pakhtunkhwa province, members of the group forcefully reject concerns from outside the country that hardline Islamic groups are taking up relief work in an effort to spread their particular ideology along with aid.

"That is rubbish. We are here to save lives and nothing else," Saeed Jamal Khan, a senior Al-Khidmat volunteer told CBS News as he turned to some of his colleagues and handed over a list of supplies to be trucked to another distribution point.

Al-Khidmat, which means "dedicated to serving humanity," is, however, among the groups suspected by Western governments of being an offshoot of Pakistani militant group Lashkar-e-Tayyaba, known to have carried out the 2008 terrorist attacks in India's commercial capital of Mumbai which killed 166 people.

The U.S. and its partners in both the flood relief effort and the war against Islamic militants are unlikely to be convinced by Al-Khidmat's claim of innocent intentions.

The problem they're confronted with, quite simply, is that they need all the help they can get. Torrential rains and floods have displaced more than 14 million people across Pakistan in the last two weeks, creating the world's biggest present humanitarian crisis.

At left: Members of a family wait for flood waters to recede so they can access their home along the banks of the Kabul River, which flows through Pakistan's Khyber-Pakhtunkhwa province, Pakistan, Aug. 10, 2010.

In spite of the Pakistani Taliban's call Tuesday for the government to boycott all American aid, U.S. helicopters have rescued hundreds of people stranded by the floods and $55 million dollars in aid has been pledged to the country.

The United Nations hundreds of millions of dollars will eventually be needed to help the flood victims.

But the role hardline Islamic groups are playing on the ground -- mingling with other private providers of humanitarian services -- has caused some concern for Western governments.

"What concerns us is any evidence of their motive being different from what they profess," one Western diplomat in Islamabad told CBS News. "We accept the need to save lives, but we must also be certain that that is the ultimate objective, nothing else."

Neither the Pakistani government nor its Western partners are in any position to try and offer an alternative for the work being done by Al-Khidmat, let alone to consider blocking them from fanning out to some of the hardest-hit locations. The demand for help is far too great and with more monsoon rains on the way, the grim conditions at many relief camps will likely only worsen in the short-term.

The future of the flood victims may become central to the U.S. interest in stabilizing the Afghanistan-Pakistan region. The floods offer an opportunity for the U.S. to win over Pakistani hearts and minds in the region, but Washington is fighting a horrible image and a counter-effort by Islamic groups that have local knowledge and well-established networks in the area.

The U.S. was already deeply unpopular in the northwest region for carrying out frequent missile strikes with pilotless drones. The strikes target militant leaders, but often bring civilian casualties and can traumatize local populations.

Despite the infusion of cash aid, humanitarian supplies and six American helicopters flying vital rescue missions, it has become extremely difficult to find anyone among the flood victims willing to voice support for the U.S.

"All I have heard of the U.S. commitment to our plight is to send these drones which have killed our people," said Saeed Khan, a farmer and father of eight children whose mud shack was washed away on Sunday. "Look around and there is no sign of any U.S. effort to help overcome poverty in this region."

Sitting inside a tent by the road near the sprawling city of Peshawar, Khan laments the criticism against Islamic groups carrying out relief work. "They at least have a heart. The U.S. doesn't have a heart, the Americans have simply killed our people."

Lali Jan, a taxi driver in Nowshera who found his cab washed away in the flood, agreed without hesitation.

"The Americans and the Pakistani government are to blame. They spend more on their wars but give very little to our people. The Americans may not have caused the floods, but their agenda will always be against us, while our own brothers from Islamic groups are helping us very generously."