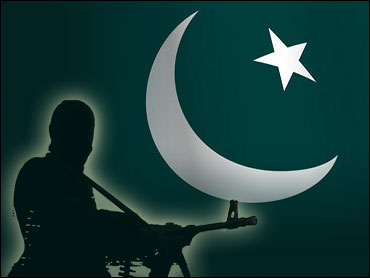 ISLAMABAD - The Pakistan army is questioning four more officers about suspected links with a banned extremist group that has called for the military to oust the country's government, the army spokesman said Wednesday.

A day earlier, the army said it detained a senior officer working at army headquarters, Brig. Ali Khan, for suspected links with the group, Hizb-ut-Tahrir. The four army majors who are being questioned have not been detained, said army spokesman Maj. Gen. Athar Abbas.

Western officials have long suspected some Pakistani military officials of having ties to Islamist militant groups, especially al Qaeda and the Taliban. Those fears spiked after American forces discovered and killed Osama bin Laden in an army town not far from Islamabad — although the U.S. has found no evidence senior Pakistani officials knew his location.

The Pakistan military has repeatedly denied that it supports extremist groups, and investigations into suspected militant sympathizers are usually conducted in secret. The army's decision to acknowledge it is investigating officers over links to Hizb-ut-Tahrir could be an attempt to counter Western suspicions that it tolerates backers of militants within its ranks.

The family of the arrested brigadier has denied he has any ties with extremist groups and has demanded he be released. A brigadier is the equivalent of a one-star general.

Khan's lawyer, retired Col. Inam Rahim, claimed that his client was arrested for demanding that someone within the military be held accountable for the covert U.S. Navy SEAL raid that killed Osama bin Laden last month in the army town of Abbottabad not far from Islamabad.

The raid humiliated the Pakistani military, which didn't know about it beforehand, and raised questions about how bin Laden could have lived in Abbottabad for five years without authorities knowing.

The army did not reveal the names of the four majors who are being questioned about suspected links to Hizb-ut-Tahrir.

Hizb-ut-Tahrir's spokesman in Pakistan could not be reached for comment.

Hizb-ut-Tahrir is an Islamist organization that wants to re-establish the caliphate, the administrative structure that once governed a large section of the Muslim world. It insists it has rejected violence, although observers say the group promotes an intolerant mindset that can ultimately lead some followers to embrace militancy.

Although it is banned in some countries, including Pakistan and parts of Central Asia, the group is active in Western countries such as the United States, where it finds protection under free speech and association laws.

Analysts say the Pakistani army is better than the country's police at rooting out extremists, but current and former military officers have participated in attacks in recent years.

Faisal Shahzad, the Pakistani-American who tried to bomb New York City's Times Square last year, allegedly was in contact with a major in the Pakistani military.

In 2009, Pakistani army headquarters in Rawalpindi was attacked by 10 men in military uniforms reportedly led by a former soldier. Also, the 2008 attacks in Mumbai, India, are alleged to have been carried out with the guidance of a Pakistani spy known only as "Major Iqbal."

One constant fear is that extremists in the military could somehow infiltrate Pakistan's nuclear program to steal materials for a terrorist weapon, but that program is governed by a multilayered security system that involves scrutiny of individuals' backgrounds and beliefs.

Pakistan has a long history of sectarian violence between Sunni and Shiite Muslims. Extremist Sunni groups like the Taliban have also turned their guns on the Pakistani state.

A group of Islamist militants attacked a police checkpoint on the outskirts of the northwest city of Peshawar on Wednesday morning, triggering a shootout that left 12 insurgents dead, said Peshawar police chief Liaquat Ali Khan. Police were tipped off about the attack and acted quickly, suffering no injuries on their side, he said.