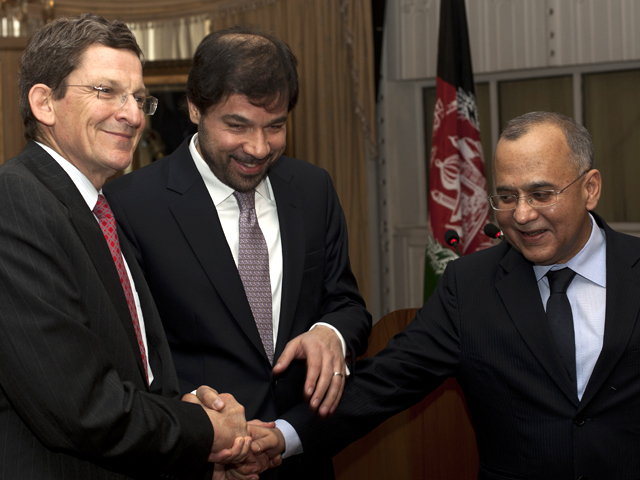 ISLAMABAD - Top U.S. officials tried Thursday to patch up relations with Pakistani leaders miffed over the surprise American raid that killed Osama bin Laden, even as members of the U.S. Congress called for cuts in aid to Pakistan over suspicions that elements of its security forces sheltered the al Qaeda chief.

High-level talks by the deputy director of the CIA and President Barak Obama's special envoy underlined the strong mutual dependency of the two countries, despite the bad blood over the bin Laden killing. The U.S. needs Pakistan to help resolve the war in Afghanistan, and American funds are critical for propping up Pakistan's economy and bankrolling its military.

The discussions come at a tense moment in relations between Pakistani intelligence and the CIA, as well as a low point in Pakistani views of the U.S., according to a poll.

Marc Grossman, the Obama administration's special envoy to Pakistan and Afghanistan, met with Pakistani President Asif Ali Zardari and other senior officials to discuss relations in the wake of the May 2 bin Laden raid, the president's office said.

Michael Morell, deputy director of the CIA, was set to meet with Pakistani intelligence chief Lt. Gen. Ahmed Shuja Pasha, said Pakistani officials briefed on the visit. They spoke on condition of anonymity because of the sensitivity of the issue.

The officials said that while they considered it a positive sign that a high-ranking U.S. intelligence official was making the trip, they expected little concrete to come out of it.

The relationship between the CIA and Pakistan's powerful Inter-Services Intelligence agency is key to the U.S. fight against al Qaeda and the Taliban. But the relationship was strained even before U.S. Navy SEALs killed bin Laden in Abbottabad, an army town just 35 miles (56 kilometers) from Islamabad, and has reached a new low since.

Pakistani intelligence has conducted no joint operations and all but cut off contact with their CIA counterparts since the bin Laden raid, said the Pakistani officials.

The CIA would not comment on the reported trip. A U.S. official would say only the goal for the "ongoing discussions" with Pakistan's intelligence service is "to cement a productive relationship, rooted in mutual interests." The official spoke on condition of anonymity to discuss sensitive strategic discussions.

The relationship between the CIA and the ISI was already buffeted in January by the arrest and detention of CIA security contractor Raymond Davis for shooting dead two Pakistani men who Davis said were trying to rob him.

Davis was eventually released in March after the dead men's relatives agreed to accept blood money under Islamic tradition.

But only a day after his release, a covert CIA drone strike killed at least two dozen people in the Pakistani tribal areas — people the CIA said were militants and the Pakistanis said were civilians. That dispute so soured the relationship that both sides agreed that CIA chief Leon Panetta and his Pakistani counterpart, Pasha, should meet face to face.

The two met at CIA headquarters in Langley less than two weeks before the bin Laden raid. Pasha thought he secured an agreement in that meeting that the two sides would come up with a new high-value target list, and that CIA drones would be used only to hunt those targets, Pakistani officials said. But before he had returned to Pakistani soil, there was another drone strike in the tribal areas, so Pasha shut down communications, the officials said.

This tension shows how difficult it will be for the U.S. to win greater Pakistani cooperation in fighting militants, even as it has provided the country's military with billions of dollars over the past decade.

This week, five Democratic senators wrote to Obama administration officials questioning the aid arrangement with Pakistan over suspicions that elements in Pakistan knew bin Laden was hiding near the capital and did not take action. The senators, among them Intelligence committee chairwoman Dianne Feinstein of California, said that while the U.S. is slashing its budget, it makes no sense to give such enormous sums unless the U.S. is certain Pakistan is rooting out terrorists within its borders.

The main U.S. demand is for Pakistan to go after Afghan Taliban chief Mullah Omar and senior members of the Haqqani militant network who are believed to be living along the Afghan border and leading the fight against foreign forces in Afghanistan.

Analysts believe Pakistani security officials are reluctant to target these figures because they have historical ties with them and view them as key allies in Afghanistan after foreign forces withdraw, an indication that pleasing the U.S. is not a high priority and reflecting anti-U.S. attitudes among the Pakistani people.

A survey taken before the bin Laden raid by the Washington-based Pew Research Center showed U.S. popularity in Pakistan has fallen to an all-time low. Just 11 percent of Pakistanis hold a favorable view of the U.S. and Obama. The survey, released Tuesday, polled 1,970 people in Pakistan in April and had a margin of error of 3 percentage points.