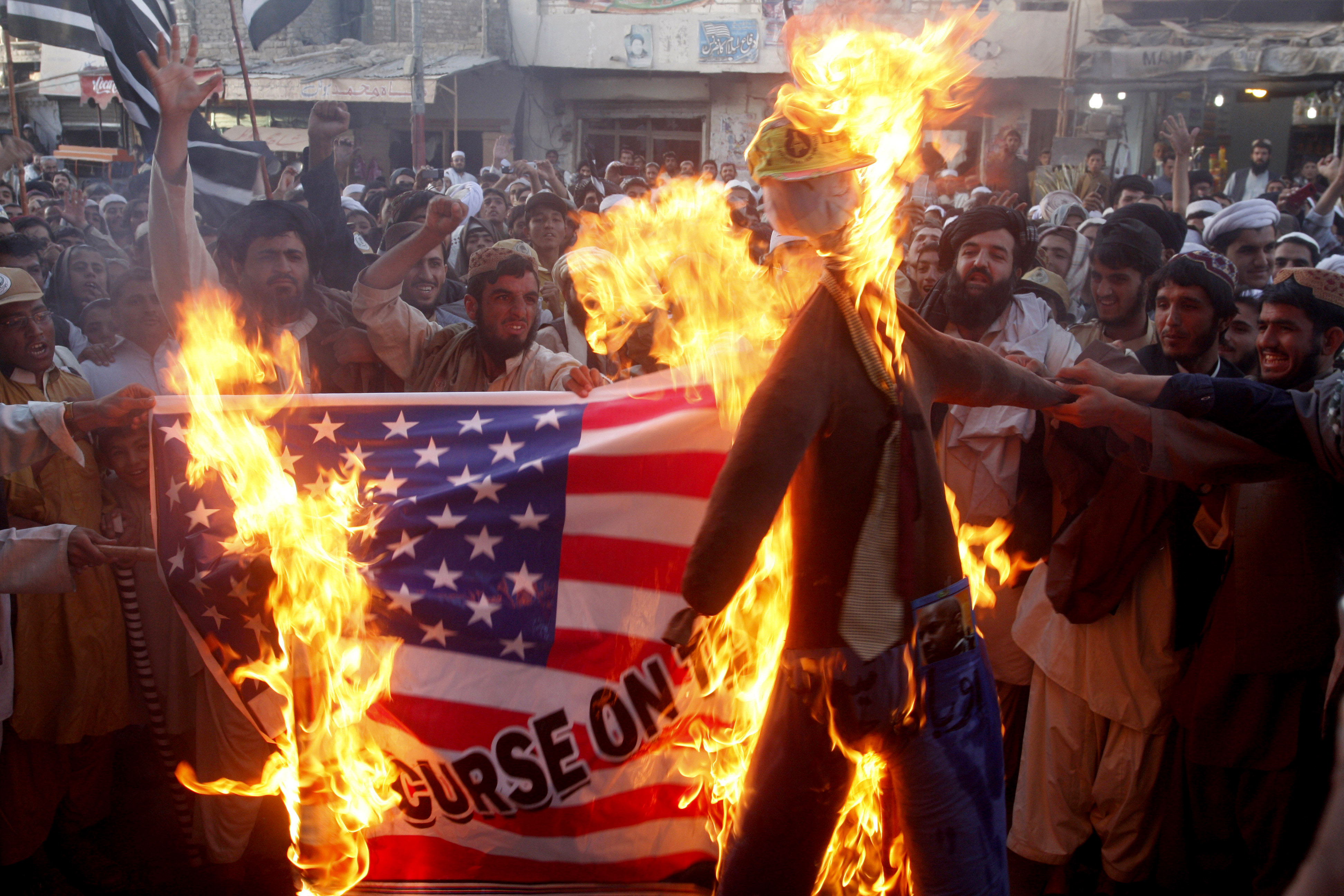 (AP) ISLAMABAD - The Pakistani Taliban announced Wednesday that they were giving a Cabinet minister an "amnesty," taking him off their hit list, because he offered a $100,000 bounty for the killing of an anti-Islam filmmaker.

Separately, a breakaway faction of the Afghan Taliban announced its own bounty for those behind "Innocence of Muslims," the film that has sparked deadly protests across the Islamic world. The group is offering almost $500,000 in gold.

Muslims have been angered by the crude, amateurish film's portrayal of the Prophet Muhammad as a fraud, a womanizer and a child molester. Dozens of people, including the U.S. ambassador to Libya, have died in violence linked to protests over the movie.

The main figure behind the video, Nakoula Basseley Nakoula, has put his home up for sale and gone into hiding since violence erupted over the 14-minute YouTube trailer for "Innocence of Muslims," which also has sparked debate over freedom of expression in the U.S. and in Europe.

Some of the most intense protests have erupted in Pakistan, where the role of Islam in society is sacrosanct and anti-American sentiment runs high. It was in that atmosphere that Railways Minister Ghulam Ahmad Bilour offered his $100,000 reward Saturday for anyone who kills Nakoula.

Bilour also appealed to al Qaeda and Taliban militants to help eliminate the filmmaker, while Pakistan's government said the bounty reflected Bilour's personal view and was not official policy.

The minister belongs to the secular Awami National Party, an ally in the government of President Asif Ali Zardari. His comments drew criticism within his own party, which is considered anti-Taliban and has lost several leaders in the fight against the insurgency.

Pakistani Taliban spokesman Ahsanullah Ahsan told The Associated Press by telephone Wednesday that the minister's views represent the true spirit of Islam, and that, consequently, the insurgents have removed him from their hit list.

But while Bilour gets an "amnesty," others in his party are still fair game, Ahsan said. Bilour could not immediately be reached for comment.

In Afghanistan, the Taliban faction known as the Dadullah Group offered eight kilograms, or 17.6 pounds, of gold to anyone who kills the film's creators. In a telephone message to the AP, spokesman Rehbar Mal, announced the reward, which would be the equivalent of about $487,000.

The group, named for a Taliban commander killed by NATO troops in 2007, broke away from the Afghan Taliban earlier this year to protest reconciliation talks with the United States. The Afghan Taliban and the Pakistani Taliban are separate, though linked, militant outfits.