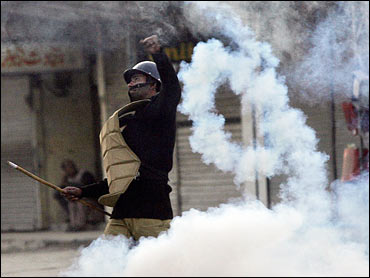 Many chanted for justice and blamed the government for their heroine's death. Others consoled each other as they wept.

The funeral for slain opposition leader Benazir Bhutto in southern Pakistan on Friday was filled with the rawest emotions for the hundreds of thousands who converged on her family's mausoleum here.

She was interred next to her father, also a popular former prime minister who met a violent death, reports CBS News correspondent Sheila MacVicar from Islamabad.

People crammed inside the cavernous hall, throwing rose petals on the coffin. Some cried, others chanted "Benazir is alive," as her body was laid to rest. One man sobbed uncontrollably, crying, "My sister has gone." Another fainted as several thousand people jostled to get a last glimpse.

Bhutto's son, Bilawal, and her husband Asif Ali Zardari, who wore a traditional white Sindhi cap and appeared composed, helped lift the coffin into the grave. An Islamic cleric led mourners in prayers.

A vast crowd congregated outside to pay its last respects, lining up in hundreds of rows for the prayers and later filing in to throw sand on the grave. They had arrived by tractors, buses, cars and jeeps that were parked in dusty fields surrounding the mausoleum in Garhi Khuda Bakhsh, where Bhutto's father, former Prime Minister Zulfiqar Ali Bhutto is also buried.

Some Bhutto supporters shouted "General, killer!" "Army, killer" in apparent reference to President Pervez Musharraf, who recently retired as army chief after eight years of military rule. Party leaders tried to pacify the crowd and urged them to stop.

Musharraf has never been popular, and now he's being blamed for having done too little to insure the safety of his main political rival, reports CBS News chief foreign correspondent Lara Logan. Pakistan's democracy hinges largely on how he responds.

Pakistan's interior minister told The Associated Press that al Qaeda and Taliban were behind the assassination of the former Prime Minister.

"We have the evidence that al Qaeda and Taliban were behind the suicide attack on Benazir Bhutto," Interior Minister Hamid Nawaz said.

Interior Ministry spokesman Javed Iqbal Cheema said that on Friday, the government recorded an "intelligence intercept" in which militant leader Baitullah Mehsud "congratulated his people for carrying out this cowardly act." He gave no further details on the nature of the intercept.

Cheema described Mehsud as an "al Qaeda leader" and said he was also behind the Oct. 18 bombing against Bhutto's homecoming parade through Karachi that killed more than 140 people.

He said Pakistani security forces would hunt down those responsible for Bhutto's death.

In cities elsewhere in Pakistan, Bhutto's supporters ransacked banks, waged shootouts with police and burned trains and stations in a spasm of violence less than two weeks before parliamentary elections.

A Pakistani security official said at least 23 people have been killed in violence and the army has been called in to help keep order in several cities in southern Pakistan.

"The situation on the ground is quite precarious," Pakistan's Geo TV Islamabad bureau chief Absar Alam told CBS' The Early Show. Alam added that the country is "spinning out of control."

Draped in the red, green and black flag of her Pakistan People's Party, the coffin had been carried about five three miles in a white ambulance from Bhutto's ancestral home to the vast marble mausoleum, passing a burning passenger train on the way.

Signboards that had been erected two months ago to mark Bhutto's return from exile to Pakistan still dotted the route. On one, someone had scrawled, "Benazir you are the hope for the poor."

In front of the mausoleum, with its three domes, mourners wept and hugged each other. Some chanted slogans against figures in the pro-government political party, as they waited for the coffin to be shifted inside. Others shouted, "As long as the moon and sun are alive, so is the name of Bhutto."

Zulfiqar Bhutto, who formed the party and is an iconic leader in Pakistan's troubled 60-year history, was executed in 1979 during the military regime of the late dictator, Gen. Zia ul-Haq, after he was convicted of conspiring to murder the father of a political opponent. Benazir was the eldest of his children.

She visited the mausoleum in October to pay respects at her father's grave, days after she narrowly escaped another suicide attack on her homecoming parade in Karachi, that killed more than 140 people. The ambulance passed over a ramp that was built for that visit.

People who gathered for Friday's funeral repeatedly chanted slogans against the former top elected officials in Sindh and Punjab provinces, who are members of the ruling, pro-Musharraf party. Bhutto supporters suspect those officials were complicit in attacks on the opposition leader - which the government denies.

"We Sindhis do not want Pakistan anymore. Why is it only Sindhi prime ministers are assassinated or killed?" said Rehmatullah, 25, who goes by one name, referring to the demise of the Bhuttos and the country's first prime minister, Liaquat Ali Khan, who was shot to death in 1951. All three died in Rawalpindi where Pakistan's army has its headquarters.

"No we need Pakistan. It was BB's mission to protect Pakistan and we will complete her mission," said Eman Ali Shah.

Bhutto, whose party has long been popular among Pakistan's legions of poor, served two terms as prime minister between 1988 and 1996. Both elected governments were toppled amid accusations of corruption and mismanagement. She had been vying for a third term if her party fared well in Jan. 8 parliamentary elections.

Bhutto was a domineering presence in her party, and there is no clear successor to the leadership. Her husband, who was freed in December 2004 after eight years in detention on graft charges, is one contender to head the party although he lacks the cachet of a blood relative.

Musharraf on Friday telephoned Zardari to express "heartfelt condolences" and said the whole nation was "grieved" at Bhutto's death, the state Associated Press of Pakistan reported.

There are other younger members of the Bhutto clan - which has itself been riven by feuds and rivalry - who have been touted as future politicians, among them Bhutto's son Bilawal, and her 25-year old niece, Fatima Bhutto, who was sometimes fiercely critical of her aunt in a weekly column for a leading Pakistani newspaper.