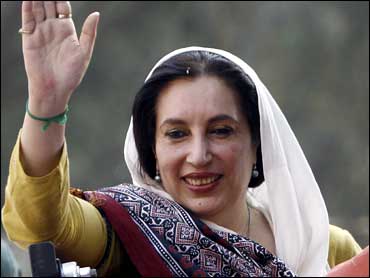 Benazir Bhutto was many things - zealous guardian of her dead father's legacy, aristocratic populist, accused rogue, even one of People magazine's 50 most beautiful people. And in the end, she was a victim of roiling passions in the nation she sought to lead for a third time.

To the West, she was the appealing and glamorous face of Pakistan - a trailblazing feminist, the first woman to lead a Muslim nation in modern times - though her aura was dimmed by accusations of corruption.

But to many Pakistanis, she was a leader who spoke for them, their needs and their hopes.

Even her worst critics would say that "she was a masterful politician," said Zaffar Abbas, an editor for the respected Dawn newspaper. She knew "what the people of this country wanted.

"If you asked an ordinary person what they achieved when Benazir Bhutto was in power, they would say at least she gave us a voice and she talked about us and our problems. That was her real achievement."

Her life was a sprawling epic. Her father, Pakistan's president and then prime minister, was hanged; one brother died mysteriously, the other in a shootout. She spent five years imprisoned by her father's tormentors, mostly in solitary confinement, before rising twice to the office of prime minister.

She fled before her conviction on corruption charges, living abroad for eight years. She could have lived there comfortably, far from the cauldron of Pakistani politics, but chose not to do so. And when she returned in October to marshal opposition to President Pervez Musharraf, a suicide attacker targeted her homecoming parade in Karachi. More than 140 people died.

The 54-year-old Bhutto escaped injury. "We will not be deterred," she said then. And on the hustings, she celebrated her survival.

Like the Nehru-Gandhi family that has long been a force in the politics of neighboring India, the Bhuttos have held a central role in Pakistan for nearly a half century.

Benazir's father, Zulfikar Ali Bhutto, was the son of a wealthy landowning family in southern Pakistan and founder of the Pakistan People's Party. With a populist, pro-democracy message, he rose to power in 1971.

But six years later, he was deposed by the military. In 1979 he was executed by the government of Gen. Mohammad Zia-ul Haq after his much-disputed conviction on charges of arranging the murder of the father of a political opponent.

A day before he was hanged, his daughter visited him in prison.

"I told him on my oath in his death cell, I would carry on his work," Bhutto would recall.

But at the time and for years after, Benazir Bhutto could not fight for her father's cause - she was in jail or under house arrest.

The elder Bhutto had sent his daughter to study politics and government at Harvard and then at Oxford, where she was elected to lead the prestigious debating society, the Oxford Union. Beautiful, charismatic and articulate, she was a dangerous opponent for the military government.

Her youngest brother, Shahnawaz, organized opposition from France, but he died under mysterious circumstances in his apartment on the Riviera in 1980; the family insisted he was poisoned, but no charges were brought. Released in 1984 to seek medical treatment for a serious ear infection in London, Benazir established a People's Party office there, and waited for an opportunity to strike back.

Two years later, she returned to lead mass rallies calling for Zia to step down and allow a civilian government and elections. He refused. But in 1988, the strongman died in an explosion on his plane.

Benazir rallied her father's party, only to find that she was being opposed by her brother, Murtaza - and that her mother was backing him. "In our family it was always a joke that my mother had a soft spot for my brother," she told The New York Times in 1994.

Still, Benazir Bhutto won on a platform of "food, clothing and shelter for all." And just months after giving birth to her first child, she took the office that was taken from her father.

Twenty months later, President Ghulam Ishaq Khan dissolved parliament and removed her from office, citing abuse of power. The new army-backed government filed charges of corruption against her, while Islamic clerics tried to get a court to bar her from running in elections. She was a bad Muslim, they said.

"Anyone who supports the Pakistan People's Party will not enter heaven," a Muslim cleric in Lahore, Abdul Qadir, told a Friday prayer congregation ahead of the October 1990 elections.

She lost the election to Nawaz Sharif (who, years later, also would be exiled and return to challenge the Musharraf government). His time in office was also short-lived because of more accusations of corruption. Under pressure, he resigned in 1993; Bhutto, by then a mother of three children, won another second term as prime minister in October 1993.

In 1996, her government fell in the face of accusations of nepotism and economic mismanagement.

Around the world, Bhutto was a feminist heroine. And in her campaigns, she advocated new services for women and opposed sexual discrimination, though few measures were adopted under her government.

In her personal life, Bhutto surprised many by agreeing to an arranged marriage in 1987 with Karachi businessman Asif Ali Zardari. She said that as the leader of a Muslim party, she was not free to marry for love, which would have "destroyed my political career," she told The New York Times in 1994.

But her marriage to Zardari would play a major role in her downfall.

Over the years, the couple would be accused of charging millions of dollars in "commissions" from foreign companies. Zardari was called "Mr. 10 Percent" during Bhutto's first term because of these alleged kickbacks; in her second term, the take and the monicker were upgraded to "Mr. 40 Percent."

Zardari spent eight years in Pakistani prisons before his release in 2004, though he was never convicted on any charge, and both he and Bhutto said the accusations were trumped up and political.

"I never influenced the awarding of a contract, and until my dying day I'll stand by it. They have tried to ruin me because they want to ruin the concept of a pluralistic, liberal Pakistan. To be accused of robbing, that really pains me," she said in 1999.

Switzerland froze more than $13 million in the couple's accounts, and convicted Bhutto of money laundering (the conviction was thrown out when she contested it).

Zardari also, briefly, was accused of engineering the 1996 death of Murtaza Bhutto, who died in a gunbattle with police in Karachi. His death contributed to the fall of Benazir's government a month later.

Bhutto tried for a third term and lost; she left Pakistan in 1999, just before a court convicted her of corruption and banned her from politics.

The verdict was later quashed, but she stayed away. She spent much of the time in London and in Dubai with her children and her ailing mother - the same mother who once opposed her political career.

Then Musharraf signed an amnesty, halting any corruption charges against her and others. And she decided to return to Pakistan and the political arena once more. She was briefly placed under house arrest when Musharraf declared a state of emergency this fall.

As she had done before, she campaigned on social welfare issues, occasionally mentioning the anti-terrorist message that had made her so appealing to American officials. Last week, after she addressed a rally in her husband's hometown of Nawab Shah, she was in a relaxed and upbeat mood.

"It feels great to be back home," she said. "A visit to every city is like a new experience for me. I'm just overwhelmed with emotion. I feel like I have been given a new life to be once more amongst my people."

She was a survivor, and proud of it. Thirteen years before, when a reporter from the Times suggested that her life was the stuff of Greek tragedy, she laughed.

"Well, I hope not so tragic," she said. "Don't all Greek dramas end in tragedy?"