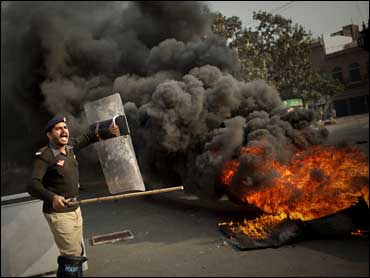 Opposition leader Nawaz Sharif called the mass rally a "prelude to a revolution."

The power struggle between the former prime minister and President Asif Ali Zardari threatens to paralyze the government and, alarmingly for the U.S., distract the nuclear-armed country from its fight against Taliban militants operating along the Afghan border.

Hundreds of police surrounded Sharif's residence in Lahore, carrying an order for his house arrest, party spokesman Pervaiz Rasheed said. But Sharif, who denounced the order as illegal, later left the house in a convoy of vehicles and headed into town.

Riot police had earlier fought running battles with stone-throwing protesters, turning the downtown into a battle zone littered with rocks and clouded with tear gas and smoke. A mob smashed windows of buses parked along the route of Sharif's convoy.

But by evening the mood was festive as police pulled back, and thousands of flag-waving supporters and cheering lawyers turned out to cheer Sharif, a local favorite.

"People have responded very overwhelmingly to the call of the hour, and I am thankful to the nation," Sharif told Geo television by phone from his car. "This is a prelude to a revolution."

Washington worries that the crisis will further destabilize the shaky the year-old government and prevent it from being an effective ally in the fight against insurgents in neighboring Afghanistan.

Suspected militants attacked a transport terminal in northwestern Pakistan used to supply NATO troops in Afghanistan before dawn on Sunday and torched dozens of containers and military vehicles, police said. 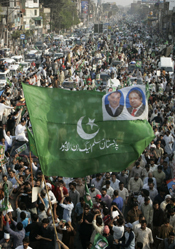 (AP Photo/K.M.Chaudary)
The gathering in Lahore was the biggest yet in the buildup to plans for a mass sit-in in front of Parliament in the capital on Monday.

The government has refused permission for the indefinite sit-in, arguing that it would paralyze the government and present a target for terrorists. It has put the army on alert in case the unrest gets out of hand.

Hundreds of police surrounded the former prime minister's residence in the eastern city of Lahore before dawn on Sunday and detained him along with scores of his supporters, a party spokesman said.

Though Sharif, his politician brother and scores of other opposition party members were initially ordered under house arrest, Sharif was allowed to leave his residence unchallenged.

Sharif denounced the order as illegal and left the house in a convoy of vehicles packed with chanting, flag-waving supporters, headed for a downtown rally that had already turned violent.

"These are the decisive moments," Sharif told supporters before climbing into a car. "I tell every Pakistani youth that this is not the time to stay home; Pakistan is calling you to come and save me."

Rao Iftikhar, a senior government official, said authorities had reached an "understanding" with Sharif that he would address the rally and return home.

But Sharif said his "destination" was Islamabad and his slow-moving convoy wended its way toward one of two main exit roads leading to the capital, about 180 miles to the northwest. 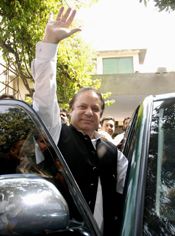 (AP Photo/Pakistan Muslim League)
(Opposition leader Nawaz Sharif waves to supporters as he leaves his home in Lahore to take part in an anti-government march on Sunday, March 15, 2009.)

Iftikhar said the government would not allow the protesters to march on Islamabad. Authorities already parked trucks across major roads on the edge of Lahore.

Some of the first demonstrators to pick their way past barricades to reach the courts on Sunday pelted riot police ringing the area with rocks. Police responded with tear gas, and beat several protesters with batons.

Associated Press reporters say several injured police officers being helped away. A handful of protesters were detained and bundled into police vans.

Later, the crowd swelled to many thousands. Many were black-suited lawyers campaigning for an independent judiciary, but most appeared to be Sharif supporters chanting "Here comes the lion!" in reference to his party symbol and "Go Zardari go!"

Reporting from Islamabad, CBS News' Farhan Bokhari said the capital has in large part been sealed.

Bokhari also reports that the leaders of the protesting lawyers say their campaign is now not just for a day on Monday, as originally planned, but will in fact be indefinite until their demands are met.

Lawyers and opposition party supporters had planned to gather near Lahore's main court complex before heading toward Islamabad to stage a mass sit-in front of Parliament, in defiance of a government ban.

To thwart them, authorities parked trucks across major roads on the edge of the city, and riot police took up positions outside the railway station and government buildings.

Protesters pelted some of the hundreds of riot police ringing the area with rocks, triggering running clashes. An Associated Press reporter saw one officer led away with a head wound.

Police repeatedly fired tear gas, scattering the crowd, and beat several stragglers with batons, only for the demonstrators to return with fresh supplies or sticks and stones.

Mobs accompanying Sharif's swelling convoy smashed the windows of buses parked along the route. Others set fire to tires, sending plumes of black smoke into the blue sky over a usually bustling boulevard littered with stones and empty tear gas shells.

Shahbaz, speaking to Geo television by phone, appealed to ordinary Pakistanis to come out onto the streets.

"(President Asif Ali) Zardari has put the nation into this deep crisis by breaking his promises," he said. "These fascist tactics cannot stop the masses who want justice." 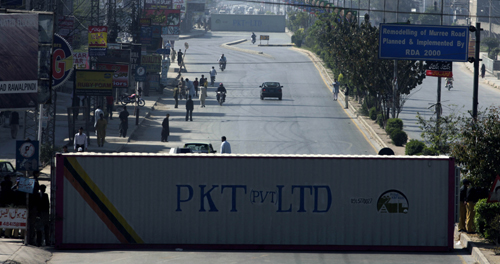 (AP Photo/Anjum Naveed)
(Large shipping containers placed by authorities block the entry of anti-government protesters into Islamabad, March 15, 2009 in Rawalpindi, Pakistan. Lawyers and opposition party supporters planned to stage a mass sit-in in front of Parliament, in defiance of a government ban.

The political turmoil began last month when the Supreme Court disqualified the Sharif brothers from elected office, over convictions dating back to an earlier chapter in Pakistan's turbulent political history.

Zardari compounded the crisis by dismissing the Sharifs' administration in Punjab, Pakistan's biggest and richest province, of which Lahore is the capital. The brothers then threw their support behind plans by lawyers to stage the sit-in.

Pakistan's state telecom regulator, the Pakistan Telecom Authority (PTA) ordered the country's mobile phone services to shut down their SMS service in Islamabad and a few other districts Sunday, as a crackdown on opposition activists and anti-government lawyers continues.

"They seem to have taken this measure, knowing that so many people rely on this facility," Haris Khalique, a civil society activist, told CBS News.

In the past two years since the former chief justice of the Supreme Court Iftikhar Mohammad Chaudhry was dismissed by former president Pervez Musharraf, protestors have extensively used SMS and mobile phone services to plan their demonstrations.

According to CBS News' Bokhari, a PTA official said that the government had already drawn up plans to shut down mobile phone services if needed.

"If the situation gets out of control, all options, including a complete shutdown [of mobile phones], are on the table. We will take further action depending on the situation," said the official who spoke to CBS News on condition of anonymity

The political turmoil began last month when the Supreme Court disqualified the Sharif brothers from elected office, over convictions dating back to an earlier chapter in Pakistan's turbulent political history.

Zardari compounded the crisis by dismissing the Sharifs' administration in Punjab, Pakistan's biggest and richest province, of which Lahore is the capital.

The brothers then threw their support behind plans by lawyers to stage an indefinite sit-in in Islamabad - a move officials say would bring the government to a standstill and present a target to terrorists.

On Saturday, after U.S. Secretary of State Hillary Clinton spoke to both Zardari and Nawaz Sharif by telephone, the government announced it would file an appeal against the Supreme Court ruling in the coming days.

Sharif's party welcomed the move but stuck by its demand for a shake-up of the judiciary.

Zardari refuses to reinstate a group of independent-minded judges fired by Musharraf.

Many observers suspect Zardari fears the judges could challenge a pact signed by Musharraf that quashed long-standing corruption charges against him and his wife, slain former leader Benazir Bhutto.

Skeptics suspect Sharif of hoping to force early elections, from which he and Islamist parties would likely profit.