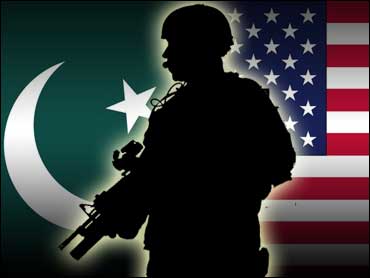 Pakistani authorities have arrested two high-ranking al Qaeda terrorists — one with a multimillion-dollar U.S. bounty on his head — in a days-long sweep that has netted at least six suspected militants, officials said Tuesday.

"In addition to Ahmed Khalfan Ghailani, whose bounty was $25 million, we have captured another most wanted suspect with a bounty on him running into the millions of dollars," Hayyat said.

He said both of the suspects were of African origin but refused to identify them or their nationalities.

Four Egyptians and a Libyan on the FBI's list of 22 most wanted terrorists are believed to be in Pakistan or Afghanistan, but it is not clear if they were among those captured. Each of the men has a $5 million bounty on his head in connection with the embassy bombings.

Osama bin Laden's No. 2, Ayman al-Zawahri, is also from Egypt. The two men are believed hiding along the Pakistan-Afghan border, far from Punjab province.

Hayyat's announcement followed news that at least six al Qaeda suspects — including a Syrian man — have been arrested in separate raids in recent days.

Three of the suspected militants — two Pakistanis and a foreigner — were arrested on a road near the eastern city of Lahore, and five grenades and two AK-47 rifles were found in their sports utility vehicle, a high-ranking intelligence official told The Associated Press.

"The previous record of the policeman shows that he has been involved in jihadi activities and had links with al Qaeda. We have initiated a probe to find out how he managed to get posted to such a sensitive place," Dogar said.

A fifth suspect, arrested Sunday at a bus station in a town near Lahore, identified himself as Juma Ibrahim, a Syrian, said district police chief Aslam Ghauri. He said Ibrahim was turned over to Pakistan's spy agency.

Another man was arrested trying to board a plane in Lahore with questionable documents, said a government official who gave no further details.

It was not immediately clear if any of the six militants described by Pakistani officials included the two senior al Qaeda men that Hayyat said were wanted by the United States.

Several of the detainees were believed to be linked to other al Qaeda suspects in custody, including a computer expert identified as Mohammad Naeem Noor Khan who was arrested July 13.

Khan provided information leading to the arrest of Ghailani in eastern Gujrat on July 25, said an intelligence official in Lahore who was involved in the raid on Ghailani.

Intelligence gained from Khan's and other arrests was a major factor in Homeland Security Secretary Tom Ridge's decision to issue a warning Sunday about a possible al Qaeda attack on prominent financial institutions in New York, Washington and Newark in New Jersey.

Pakistani officials are also pointing to the arrest in June of Masrab Arochi — nephew of former al Qaeda No. 3 Khalid Shaikh Mohammed — as providing useful intelligence. Arochi was among 10 suspects arrested in raids in the southern port city of Karachi.

An intelligence official in the capital, Islamabad, said Arochi led police to a network of al Qaeda operatives and that several as-yet-undisclosed arrests have been made. He would not confirm any direct link between Arochi and the arrest of Khan, the computer expert, but said Arochi has been made available to U.S. intelligence agents.

Pakistan has vowed not to turn him over to the United States.

Meanwhile, details emerged about the hunt that led authorities to Ghailani, the suspect in the U.S. Embassy bombings in Kenya and Tanzania that killed more than 200 people — including 12 Americans.

Ghailani arrived in Pakistan on a Kenyan Airlines flight to Karachi on Aug. 6, 1998, a day before the attacks. He was a ghost until his arrest nearly six years later, apparently as he planned to flee the country.

A senior intelligence official told AP that Ghailani spent time in the tribal area of South Waziristan before traveling in recent weeks to Gujrat. Al Qaeda "facilitators" arranged for him to hide in several local houses, said the official, who asked that his name not be used.

Officials also believe Ghailani was hiding for a while in Karachi, home to a number of local extremist groups as well as al Qaeda, and in Lahore.

Raja Munawar Hussain, the police chief in Gujrat, told AP that a front man who leased a car and opened a bank account for Ghailani also was arrested.

On Monday, police said they have arrested some people in connection with the assassination attempt on Shaukat Aziz, the country's prime minister-designate, by a suicide bomber in Fateh Jang town, about 35 miles southwest of Islamabad.

Pakistani police also arrested two suspected Islamic militants and seized weapons after a shootout on the outskirts of an industrial city in eastern Pakistan, a senior police official said Monday.

Also on Monday, a suspected militant surrendered to police in the southern city of Karachi, an official said.

Once a sponsor of the Taliban, Pakistan has been a key ally in the U.S. war on terrorism, but that had spurred militant anger against President Gen. Pervez Musharraf — himself the target of at least two assassination bids late last year. Musharraf's government has tried to crackdown on militants sheltering in lawless territory near the Afghan border.