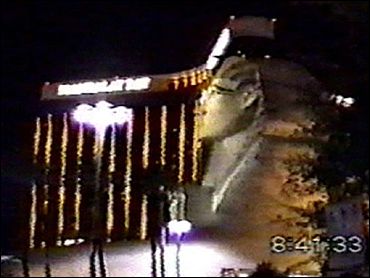 Alerted around the same time to the Spanish footage as well as a second surveillance tape found in the apartment of a Detroit terror cell, Las Vegas authorities chose a private briefing to casino security chiefs and no public alerts.

The latter response has put authorities in America's gambling capital on the defensive after Justice Department documents and a federal prosecutor emerged this week to suggest Las Vegas' decision may have had to do with concerns about tourism or the casinos' legal liability.

On Tuesday night, FBI and police officials in Las Vegas gave their own account after a federal judge granted them permission to talk despite a gag order in the Detroit terror case last year that produced much of the video evidence.

The officials confirmed that Las Vegas authorities, including casino officials, were shown the video surveillance in fall 2002 but they decided against public warnings, even though both tapes showed casing footage of the same three casinos.

Authorities also were told that the Spanish footage of potential terror targets made an apparent reference to Khalid Shaikh Mohammed, mastermind of the Sept. 11, 2001, attacks on the United States, and that some of it had been sent to al Qaeda terrorist leaders in Afghanistan, according to Spanish documents provided to U.S. authorities.

According to documents and interviews reported by The Associated Press on Monday, federal prosecutors in Detroit alleged as early as September 2002 that Las Vegas authorities didn't want to issue a public warning because of concerns it might hurt tourism or affect the casinos' legal liability.

Richard Convertino, one of the prosecutors who spoke to AP about his Las Vegas concerns, was accused in court filings Tuesday by lawyers for three defendants convicted in a Detroit terror cell of violating the judge's gag order by speaking out.

Las Vegas authorities strongly dispute that those factors affected their decision. "We took the tapes seriously," Nanz said. "When we get a tape like that ... further investigation is required to determine its relevance. And that's what we did."

Las Vegas officials, however, gave varying reasons as to why a public warning wasn't needed.

Nanz said one of the two tapes, the Spanish al Qaeda footage, was still classified at the time and Las Vegas authorities weren't immediately told that a witness, named Youseff Hmimssa, would corroborate the threat on the Detroit tape by saying members of a terror cell in Detroit had vowed to destroy the tourist city.

"The FBI in Las Vegas was not made aware in advance that Hmimssa's testimony would implicate security issues with Las Vegas," he said.

Clark County Undersheriff Douglas Gillespie said Tuesday that while two of his officers had indeed seen the footage, authorities didn't see an imminent threat. "At no time did the information gleaned from these videos change the threat level in Las Vegas," Gillespie said, adding that he believed his department handled the information correctly.

Sharon Lever, an assistant U.S. attorney in Las Vegas, offered another reason in an e-mail she sent Detroit prosecutors in fall 2002 shortly after they alerted Las Vegas to the first tape.

"The FBI here has looked at the tape. ... They said it is not a surveillance tape," Lever wrote.

Officials are at a loss to explain some of the references in Justice Department documents from 2002 and 2003, except to say various officials had differing recollections or incomplete information and some of the prosecutors in the Detroit case are now under investigation.

For instance, Assistant U.S. Attorney Keith Corbett wrote in a Justice memo a year ago that FBI agent Paul George specifically flew to Las Vegas to apprise authorities about Hmimssa's testimony. He also wrote that casino and FBI officials there declined an offer to review the tapes with George, and only two local police officials showed up.

But Nanz said George never offered to show the video footage to FBI officials in Las Vegas and never told them about Hmimssa. Nanz also noted the casinos might have declined a second invitation to view the tapes because they had seen them once already months earlier.