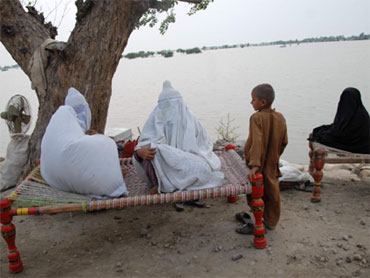 Pakistan issued new flood warnings Tuesday as more rains fell and rising water levels threatened to overwhelm one of the country's biggest dams. At least 1,200 people have died so far in the worst flooding to hit Pakistan in generations.

Relief work has been hampered by submerged roads, washed out bridges, and downed communication lines, and survivors have complained about government inaction. Other countries, including the U.S., have pledged assistance to Pakistan, which was already struggling to control a rapacious and violent Taliban militant movement.

In the northwest, the hardest-hit region, new downpours added to the misery.

"If needed, forced evacuation will be started," said Adnan Khan, a spokesman for the Disaster Management Authority of Khyber-Pakhtoonkhwa province.

As bloated rivers flowed away from the northwest, they began to inundate villages in Punjab province in the east. Villagers in Mianwali, Layyah, Taunsa Sharif and Rajanpur were affected as floodwaters began to seep into their homes. Punjab is Pakistan's most populous province and home to many of its biggest farms.

Some 2 million survivors of the floods require assistance, officials have said.

CBS News correspondent Richard Roth reports that rescue agencies and other organizations working on the ground say the death toll could already be 3,000 - three times higher than the official government tally.

They also fear the toll will grow because of the threat of deadly diseases, like cholera.

The northwest is the epicenter of Pakistan's battle against al Qaeda and the Taliban. Alongside military and police operations, the government - with the support of the West - has tried to improve its services and living standards there to blunt the appeal of militancy.

The Pakistani army, which has the helicopters, boats and infrastructure needed for relief work, is delivering food, medicine and tents, as are government agencies and several different political parties and welfare organizations.

But many flood victims were unhappy with the response. About 300 people blocked a major road in the hard-hit Nowshera district to protest at receiving little or no aid, witnesses said.

At least one extremist group - a welfare organization allegedly linked to the Lashkar-e-Taiba terrorist network - is also helping survivors. The group, Falah-e-Insaniat, helped civilians fleeing the Swat offensive, as well as after other disasters.

The United States, keen for an opportunity to win friends in the region, is providing $10 million dollars in emergency assistance.

Pakistani and U.S. officials confirmed to CBS News' Farhan Bokhari that Pakistan's federal government is urgently seeking the deployment of U.S. Chinook helicopters to help with relief work in the northwest.

Chinooks - massive, heavy-lift helicopters - are in particularly high demand because the flooding has destroyed as many as 100 bridges in the region, making it impossible to move the massive amount of relief supplies needed into the affected areas, and the huge numbers of victims out.

The last time the U.S. was asked to deploy Chinooks in Pakistan was in the wake of the devastating earthquake in 2005 which left some 70,000 people dead. Bokhari says there are suggestions already that the damages to Pakistan's infrastructure due to the flooding could be comparable to the quake, even if the death toll isn't nearly as high. 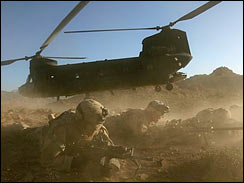 (AP)
Roth reports that Chinooks are far more than useful emergency relief equipment - the twin-rotor copter is a powerful political symbol of U.S. good will. Days after the 2005 earthquake, eight of the American helicopters were moved from war-on-terror duty in Afghanistan to assist in earthquake relief.

(Left: A U.S. Army Chinook is seen during an operation in Afghanistan in 2006.).

The Chinooks ferried everything from drinking water to Iranian medical supplies and shelters. Roth reports that in December 2005, the Chinooks even carried Christmas presents to Pakistani survivors and refugees (most of whom are non-Christian). Roth, who covered the earthquake relief effort in Pakistan, recalls, the stars and stripes were discreetly covered on the choppers' fuselages -- but their origin was no secret.

There's no doubt they helped save lives. Whether they also won hearts and minds in Pakistan's hinterlands is probably still a matter of debate. There's no proof the U.S. ever attached a quid-pro-quo to the relief mission - which some in Washington advocated - seeking an opportunity to obtain free access for U.S. forces to extend anti-terror operations in Pakistan's volatile border regions.

The U.S. has also provided rescue boats, water-filtration units, prefabricated steel bridges and thousands of packaged meals that are being distributed by the army and the government.

Other foreign countries, aid groups and the United Nations have promised or are delivering aid. But for victims now mostly surviving in baking hot camps or in the open, it cannot come quick enough.

"This is the only shirt I have," said Faisal Islam, sitting on a highway median, the only dry ground he could find in Camp Koroona village in the northwest. Hundreds of people in makeshift shelters constructed from dirty sheets and plastic tarps were also there. "Everything else is buried."