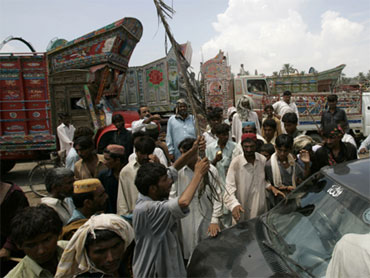 Angry flood survivors in Pakistan blocked a highway to protest slow delivery of aid and heavy rain lashed makeshift housing Monday as a forecast of more flooding increased the urgency of the massive international relief effort.

Pakistan's worst floods in recorded history began more than two weeks ago in the mountainous northwest and have spread throughout the country. Some 20 million people and 62,000 square miles of land - about one-fifth of the country - have been affected.

The scale of the disaster has raised concerns it could destabilize the country, which is pivotal to U.S. hopes of defeating al Qaeda and the Taliban.

Hundreds of victims blocked a major highway with stones and garbage near the hard-hit Sukkur area, complaining they were being treated like animals. Protester Kalu Mangiani said government officials only came to hand out food when media were present.

"They are throwing packets of food to us like we are dogs. They are making people fight for these packets," he said.

CBS News correspondent Richard Roth reports that, where there is some shelter for victim, there's poor sanitation, and growing concern that recently discovered cholera will spread.

A case of the deadly waterborne disease was confirmed Saturday in Pakistan's flood-ravaged northwest, and aid workers said there would almost certainly be more.

There's so little (water) that's safe to drink, reports Roth. The U.N. children's agency warned 3.5 million children were at high risk of deadly waterborne disease such as diarrhea and cholera. It said it did not have enough funds to distribute clean water to victims, or give them medical care.

"It was unbelievable to see and realize that people have been without any kind of help for three weeks," Borge Brende, secretary general of the Norweigan Red Cross, told CBS News.

The Sindh irrigation minister, Jam Saifullah Dharejo, said the dam in Sukkur faced a major test of its strength as floodwaters coursed down the Indus River into Pakistan's highly populated agricultural heartland.

"The coming four to five days are still crucial," he said.

U.N. Secretary-General Ban Ki-moon flew over the flood-hit area Sunday and said he had never seen a disaster on such a scale. He urged the international community to speed up assistance.

The world body has appealed for an initial $460 million to provide relief, of which about 60 percent has been given.

"The response from some sections of the international community has been lamentable," Clegg said, without naming the countries he believed had failed to offer appropriate help.

Britain's government has so far provided 16.8 million pounds (US$26 million) in emergency aid in response to the floods, making it one of the largest foreign donors.

The European Union also announced it was considering forming a task force to better coordinate emergency aid in the future after French President Nicolas Sarkozy said the EU's euro 40 million ($51 million) in humanitarian aid was insufficient.

The latest flooding over the weekend hit a poor region on the border between Sindh and Baluchistan provinces.

Sher Khan Bazai, the top government official in Nasirabad district, said 25,000 families had been made homeless by waters 8 feet high in some places. About 4,000 small villages had been either cut off or washed out.

"Water is everywhere," he said.

Once the floods recede, billions more dollars will be needed for reconstruction and getting people back to work in the already-poor nation of 170 million people. The International Monetary Fund has warned the floods could dent economic growth and fuel inflation.

While local charities and international agencies have helped hundreds of thousands of people with food, water, shelter and medical treatment, the scale of the disaster has meant many millions have received little or no assistance. The U.N. has voiced fears that disease in overcrowded and unsanitary relief camps may yet cause more deaths.