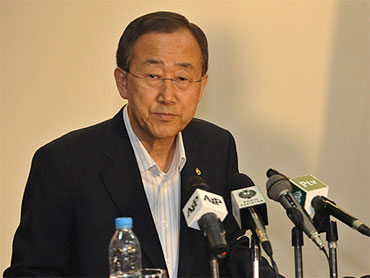 U.N. Secretary-General Ban Ki-moon said Sunday the flooding in Pakistan was the worst disaster he had ever seen, and urged foreign donors to speed up assistance to some 20 million people affected.

Ban spoke after flying over some of the worst-hit areas.

"This has been a heart-wrenching day for me," he said alongside President Asif Ali Zardari. "I will never forget the destruction and suffering I have witnessed today. In the past I have witnessed many natural disasters around the world, but nothing like this."

The floods began more than two weeks ago and have hit about one-quarter of the country. Huge swaths of land remain under water, and hundreds more homes were flooded over the weekend.

While the death toll of 1,500 is small compared to other disasters, the extent of the flooding and number of people whose lives have been disrupted is staggering.

A case of the deadly waterborne disease was confirmed Saturday in Pakistan's flood-ravaged northwest, and aid workers said there would almost certainly be more. The discovery came as new flood surges hit the south.

Cholera was confirmed in Mingora, the main town in the northwest's Swat Valley, U.N. spokesman Maurizio Giuliano said. Other cases were suspected, and aid workers are now responding to all people exhibiting acute watery diarrhea with the assumption that it's cholera, Giuliano said.

Cholera can lead to severe dehydration and death without prompt treatment, and containing cholera outbreaks is considered a high priority following floods.

The U.N. has appealed for an initial $460 million to provide relief, but only 20 percent has been given.

Once the floods recede, billions more will be needed for reconstruction and getting people back to work.

The International Monetary Fund has warned the floods will likely bring dire economic consequences in a country already reliant on foreign aid to keep its economy afloat and one key to the U.S.-led war against al Qaeda and the Taliban.

"Waves of flood must be met with waves of support from the world," said Ban. "I'm here to urge the world to step up assistance," he said.

The U.S. has pledged more than $70 million in aid so far and provided a fleet of military helicopters to help deliver it, reports Roth. It's a humanitarian mission with a strategic interest, as Washington hopes the assistance will help improve its image in the country - however marginally - as it seeks its support in the battle against the Taliban in neighboring Afghanistan.

President Zardari has been criticized for his response to the disaster, especially for going ahead with a state visit to Europe just as the crisis was unfolding. Zardari has visited victims twice since returning, but images of him at a family owned chateau while in France are likely to hurt him for months to come.

In his first comments to the media since returning, he defended the government.

"The government has responded very responsibly," he said, saying the army, the police and officials were all working to relieve the suffering. "I would appeal to the press to understand the magnitude of the disaster."

The monsoon rains that triggered the disaster are forecast to fall for several weeks yet, meaning the worst may not yet be over.