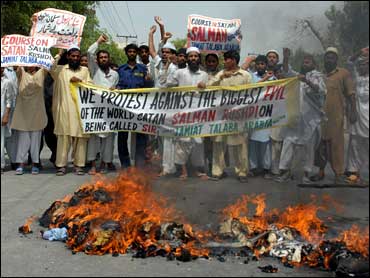 This story was written by Farhan Bokhari, reporting for CBS News in Pakistan.

Rushdie, the author of the controversial book, "The Satanic Verses," which infuriated Muslims across the world when it was published in late 1980s, was awarded a knighthood for literature on Queen Elizabeth's birthday honors list, which was published Saturday.

The reaction has been building since the announcement, with Pakistan now joining Iran's official opposition to Rushdie's honored status.

"We have to look at the root causes of militancy," Ijaz ul Haq, Pakistan's Minister for Religious Affairs told CBS News. "The root cause is that you are giving knighthood to someone who commits blasphemy. This leads to extremism and there is a danger of people considering suicide attacks in retaliation. He must be de-knighted immediately."

Earlier reports suggested ul-Haq had endorsed suicide attacks in retaliation for Rushdie being honored, but the minister told CBS News that he was misquoted by local media, who incorrectly translated his Urdu language statement, which was then picked up by Western news organizations.

Iran accused Britain on Sunday of insulting Islamic values by knighting Rushdie — a move which revived memories of the 1989 "fatwa," or religious decree, condemning Rushdie to death, issued by Iran's late spiritual leader Ayatollah Khomeini. That decree forced Rushdie into hiding for nine years. He now lives in New York.

"This is a source of anguish for Muslims, and it will encourage people to commit blasphemy against Prophet Mohammad," said Sher Afghan Niazi, Pakistan's Minister for Parliamentary Affairs, in remarks before lawmakers.

The Pakistani Foreign Ministry also issued a strong rebuke, prompting speculation that it might be acting primarily to keep the government on the favorable side of an anticipated public outcry. "Certainly Salman Rushdie has tried to insult and malign Muslims. We deplore the decision of the British government to knight him," said Tasneem Aslam, the senior spokeswoman for the ministry. "This decision is very obviously insensitive to the sentiments of Muslims around the world."

Diplomats from Muslim countries have warned that Britain's move could serve not only to provoke fresh protests in Islamic countries, but may also be used as a pretext for future terror attacks.

"This decision has struck a very sensitive chord. If some individual or group tries to take the law in his hands, and even attacks someone, that will be a popular thing," a senior Islamabad-based diplomat from an Islamic country told CBS News on condition of anonymity.

Some analysts have suggested the strong reaction from Pakistan's government may be a precautionary step against its critics, who often accuse President Pervez Musharraf of being too friendly with the United States. Musharraf, a general who seized power in a bloodless 1999 coup, is a crucial, though controversial, U.S. ally in the war on terror.

"For any pro-Western government in a Muslim country, it's very difficult not to take a strong public position on this issue," another Islamic country's diplomat told CBS News. "With the public already skeptical of their governments' close ties to the U.S., Islamic countries must come out strongly condemning this," added the diplomat.

Western diplomats based in Islamabad said they were expecting to see public demonstrations over the Rushdie knighthood issue, possibly called by Pakistan's more fundamental Islamic political parties. One Western official suggested such protests may provide a way for the more extreme parties to widen their appeal among members of the Pakistani public.

Farhan Bokhari has been covering southeast Asia for several large European news organizations for 16 years. Based in Islamabad, his focus is security issues, in particular al Qaeda and the regional aspects of the global fight against terrorism.