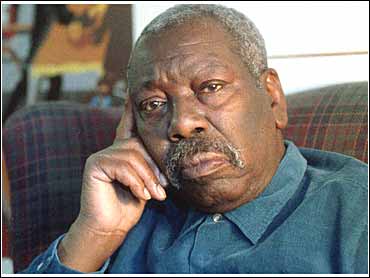 Painter Jacob Lawrence, whose stark images in bold colors illuminated the black experience in such paintings as the celebrated "Migration" series, died Friday. He was 82.

Lawrence died in his sleep at his Seattle home, said Peter Nesbett, director of the Jacob and Gwendolyn Lawrence Family Foundation.

"He was an extraordinary modernist painter that successfully balanced an interest in the abstract principles of painting and a strong commitment to social issues," Nesbett said.

Lawrence was born Sept. 7, 1917, in Atlantic City, N.J. His parents were among many blacks who headed north looking for opportunity. His mother was a domestic worker from Virginia and his father, a cook, was from South Carolina.

Lawrence lived in Easton, Pa., and in Philadelphia and was in and out of foster homes before settling in Harlem with his mother when he was 13.

Lawrence was just 21 when he fulfilled his early promise as an artist and a witness to history in 1939 with a series of works depicting the 19th century slave rebellion in Haiti and a 63-work series on the lives of American abolitionists Harriet Tubman and Frederick Douglass.

When he was 23, he applied his vivid narrative style to "Migration," a 60-painting work depicting the movement of black Americans north to jobs and hope.

The work was an immediate success, featured in Fortune magazine and shown at New York's Downtown Gallery by prestigious art dealer Edith Halpert in late 1941.

"Migration" was sold soon after completion. The even-numbered panels went to the New York Museum of Modern Art and the odd-numbered ones to the Phillips Collection in Washington, D.C., but the series has been reunited several times for exhibit. The 18-by-12-inch panels were seen around the nation from 1993-95.

Lawrence and artist Gwendolyn Knight, whom he married in 1941, laid out and prepared the panels when a grant enabled him to rent an $8-a-month studio in Harlem. He had worked since he turned 21 for the Works Project Administration Federal Arts Project, which paid him $23.86 weekly to paint.

He did "Migration" all at once, exhausting a brilliant palette of black, brown, white, red, blue, green, orange and yellow as he moved from one panel to another.

"I thought in terms of one work and not 60 works. And to hold it together I wanted to use the same colors in the same way…If I had painted one painting and completed it and gone on to the next 60 times, they would all be different," Lawrence said in a 1994 interview with The Associated Press.

"Considering the violence and pathos of so much of his subject matter—prisons, deserted villages, city slums, race riots, labor camps his images are restrained, and all the more piercing for their lack of bombast," Hughes wrote. He cited Lawence's image of a lynching: no body, no jeering crowd, "only bare earth, a branch, an empty noose, and the huddled lump of a grieving woman."

In the years after that explosive beginning, Lawrence traveled, painted, published and taught.

In 1949, as abstract expressionism transformed the art world while he continued in his representational style, he had a breakdown. He painted throughout his 10-month stay at a psychiatric hospital in New York.

Celebrated with retrospectives, commissions, awards and honors, his work mellowed into more subtle colors and softer forms. He continued to start with a drawing, using paint to flesh out the image.

"The search goes on for something else, Lawrence said in a 1994 interview with the Seattle Post-Intelligencer. "I don't know what it is—some other dimension I still hope to acquire."

He and Knight lived in New Orleans, rural Virginia, Black Mountain College in Asheville, N.C., New York City again, Hayward, Calif., and finally settled in Seattle in 1970, when he became an art professor at the University of Washington.

"From an artistic point of view, Jake was a very modest man, but he knew he was good," said Norman Lundin, a friend and fellow art professor at the university.

The couple continued to live and work in a modest bungalow near the campus even after Lawrence's retirement in 1983.

But he was never sure his personal migration was over.

"I still don't feel settled," he said in 1986. "I guess I want to add a further dimension to my work. I know I'm looking for something…I'll continue looking for it the rest of my life."

Trevor Fairbrother, modern art curator at the Seattle Art Museum, called Lawrence "certainly the most important artist in this city."

"He made art that was fearless in its statements and art that was also beautiful and honest. He spoke the truth in everything he did," Fairbrother said.

Edward DeLuca, director of DC Moore Gallery in New York, which represented the artist along with Francine Seders Gallery in Seattle, recalled traveling with Lawrence to museums around the country.

"Jake would draw a huge group of people from the local communities to hear his lectures," DeLuca said. "He had a way of gathering people and bringing them together, whether young or old…He would help you realize who you were."