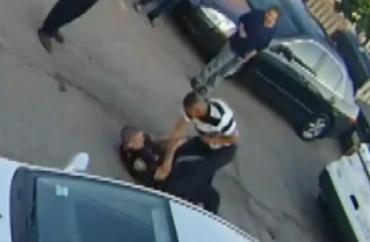 OXNARD, Calif. — New video was released Friday showing a struggle between an officer and a suspect moments before an officer-involved shooting took place in Oxnard last weekend, CBS Los Angeles reports. After the suspect was shot, he fled to his home and then kept police at bay for hours.

Police eventually gained entry and took the suspect into custody.

CBS Los Angeles spoke to Oxnard's assistant police chief, Eric Sonstegard, about the incident and what led up to it.

It was Sunday evening. The officer was making rounds at the Royal Duke Mobile Home Park when he saw Tapia.

Police say they were looking for Tapia, a known criminal with outstanding warrants.

"Once he see Mr. Tapia he's only a few feet away from him and he chooses to make contact with him at that point and decided to take him into custody and that's when the physical altercation began," Sonstegard says.

The fight moves into the street. He said that's when Tapia's family came outside. They are heard on the video asking him to stop fighting.

"As he would try and reach for that Taser, Mr. Tapia would pull the officers wrist away and was not allowing him to access those tools," Sonstegard says.

"At this time Officer Oncea's gun has dislodged from his holster and it's now sitting next to him and it's like the officer needs to get to it before Mr. Tapia gets to it," Sonstegard says.

Oncea shoots his weapon hitting Tapia in the arm.

After a few more punches, Tapia runs off towards his home.

SWAT was called to the scene and made multiple attempts to get Tapia to surrender, police said.

Officers finally made entry and took him into custody.

Tapia was booked into the Ventura County Jail.

Tapia is facing several charges including resisting arrest and assaulting a police officer.