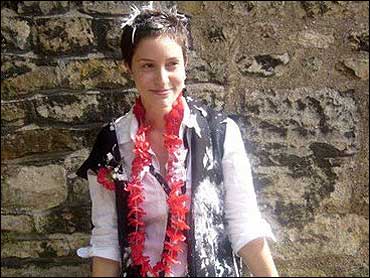 For students at the University of Oxford, Facebook is a great way to keep posted on gossip and parties. For campus officials, it's a new way to find — and fine — troublemakers.

After exams, students at the venerable English university traditionally drop their serious ways and indulge in a spasm of "trashings" — rowdy revels that include dousing classmates in foam, eggs and flour.

In recent years, students have taken to posting photos of the mess on Facebook, the popular online social networking site.

Disciplinary officials at Oxford have caught on — and have begun e-mailing students fines of $80 to $200 for breaking campus rules, said Martin McCluskey, president of the Oxford University Students Union.

McCluskey sent an e-mail to all members of the student union warning them that they are being spied upon by school officials trolling through Facebook profiles containing photos of "trashings."

"It's fairly disgraceful and underhand," he said Tuesday. "Disciplinary procedures are supposed to be transparent."

A university spokesman confirmed the practice, saying officials began searching Facebook after receiving complaints of unruly student behavior. The 800-year-old university has been issuing fines for misdemeanors such as spraying fluids and hurling eggs hurling since 2004.

"The University Proctors have told the students that they are welcome to meet their friends after their exams but that students who create a mess in the street with food or alcohol, or who indulge in anti-social behavior contrary to University regulations, will be disciplined," the spokesman said on condition of anonymity, in line with university policy.

The student union advised students with Facebook accounts to change their privacy settings to prevent staff and faculty from viewing their profiles and photographs.

Facebook has an estimated 30 million users around the world — and has seen a surge in popularity coincide with an increase in the number of users busted by Facebook photos and comments.

Last week, Miss New Jersey Amy Polumbo was made to sweat over whether she would be stripped of her crown. Organizers had been sent photos from Polumbo's Facebook page showing her acting "not in a ladylike manner" — including one in which her boyfriend appears to be biting her breast through her shirt.

In April, five students at a Toronto school were banned from an end-of-the-year trip after disparaging remarks about a teacher were found on Facebook.

Alex Hill, 21, a philosophy and mathematics student at Oxford, said she was among students to receive a disciplinary e-mail. Hill said the e-mail stated that three of her photos provided evidence she had engaged in "disorderly" conduct.

"They gave me links to three photos on Facebook where I've got shaving foam all over me as examples of my disorderly conduct," she said. "I think it's an appalling thing to do."