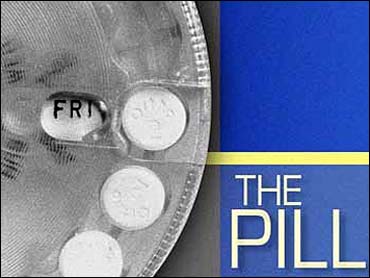 For overweight women, birth control pills don't offer as reliable protection against pregnancy as one might think, new research shows.

"Overweight women have about 60 percent higher risk of pregnancy than normal-weight women," Victoria L. Holt, PhD, MD, an epidemiologist at the Fred Hutchinson Cancer Research Center and the University of Washington in Seattle, tells WebMD.

Holt's study, funded by the National Institute of Child Health and Human Development, appears in the latest issue of the journal Obstetrics & Gynecology.

Take it seriously, says Paul Norris, MD, director of reproductive health at the University of Miami School of Medicine. Norris's research, which he reported a year ago, had a similar conclusion.

"Obese women have higher risk for [birth control] pill failure," Norris tells WebMD. "I tell patients, 'Use the pill, but use a condom as a backup for more protection.' A lot of people are doing that anyway, especially if they are at risk for HIV."

Oral contraceptives have never been a guarantee against pregnancy. Studies have long identified a failure rate of less than 1 percent. However, the National Survey of Family Growth — considered the best national estimate of women's behaviors — puts that rate higher, at 5 percent to 7 percent.

In a pilot study, Holt and colleagues found a higher risk of pill failure in women with higher body mass index (BMI, an indirect measure of body fat). In one year, 5 percent to 7 percent of overweight women got pregnant, compared with 2 percent to 3 percent of normal-weight women.

In detailed, one-on-one interviews, researchers documented each woman's oral contraceptive history — her pill-taking patterns (the time of day she took her pills, which can alter effectiveness) as well as brand and dose.

Researchers also noted other health details, like the women's weight and BMI.

"Higher body weight affects metabolism, which may cause birth control hormones to be 'used up' more quickly," she tells WebMD. The hormones therefore offer less protection, since they aren't circulating in the bloodstream very long. Also, overweight people may metabolize hormones more quickly. That could be another reason why birth control pills aren't as effective in overweight and obese women, she explains.

Another factor: "Hormones in birth control pills are fat soluble, which means the hormones can be stored in fat," she says. "A woman with more fat storage may have more hormones trapped in that fat and not circulating in the bloodstream."

Given today's low-dose birth control pills, "it's reasonable to believe that it's not adequate for some women now," Holt adds.

What Should You Do?

Getting a higher-dose birth control pill is not the answer, says Holt.

"Overweight women have heart disease risk factors, and higher-dose birth control pills will make that risk greater," she tells WebMD. "Talk to your health care provider, and depending on where you are in your reproductive life, you may want to consider different options ... vasectomy, or tubal sterilization, or an IUD."

For women who have not completed childbearing, the pill is still more effective than other temporary birth control methods, says Holt. "But they might want to add another method like condoms, if it's important to them to not have a pregnancy."

Do women who lose weight have a lower risk of pregnancy? "We haven't looked at that," Holt tells WebMD, "but based on the mechanisms we're looking at, it makes sense."