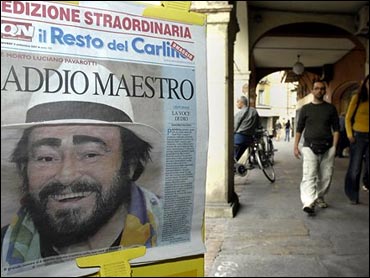 Hundreds of people gathered Thursday night in Modena's main piazza to pay final respects to Luciano Pavarotti, whose vibrant high Cs and ebullient showmanship made him one of the most famous singers in the world.

The crowd applauded in a sign of respect as pallbearers carried the casket into Modena's cathedral, where the funeral is to be held on Saturday.

Pavarotti died early Thursday at the age of 71.

CBS News correspondent Allen Pizzey reports Pavarotti had pancreatic cancer, one of the most virulent and deadly forms of cancer, which killed him within a year of diagnosis.

While Pavarotti moved the world with what one admirer called "the last great voice" of Italian opera, his legacy extends far beyond the opera house. The tenor collaborated with classical singers and pop icons alike to bring opera to the masses and in the process, rescued the art from highbrow obscurity.

In many ways, Pavarotti fulfilled the public's imagination of what an opera star should be. He often wore a colorful scarf and a hat, be it a fedora or a beret, and while he didn't always have a beard, it was hard to imagine him without it.

His heft - as well as a restaurant on his property in Modena - underlined his gourmet appetite. But above all, his crystal-clear voice, prized for its diction, made him the most celebrated tenor since Caruso.

The world is paying tribute. Inside Modena's Piazza Grande, hundreds of people gathered for the beginning of the public viewing, which is to continue, except for a few overnight hours, until just before the funeral.

2Police on horseback stood at attention Thursday night as the first mourners shuffled up the steps into the cathedral.

Italian Premier Romano Prodi is among the many dignitaries expected at attend Saturday's funeral. The ANSA news agency says tenor Andrea Bocelli will be at the funeral and is to sing the hymn "Panis Angelicus."

But many ordinary fans - some of whom have been weeping outside Pavarotti's home and in the street next to the cathedral - are also expected to be on hand. Authorities, preparing for large crowds, are stationing giant television screens near the church and have set up additional public transportation to shuttle mourners in and out of the city center for Saturday's service.

3
As word of Pavarotti's death spread around the world, the Vienna State Opera raised a black flag of mourning and the Guards band at Buckingham Palace played Pavarotti's signature aria "Nessun Dorma" at the Changing of the Guard ceremony.

In his heyday, Pavarotti was known as "the King of the High Cs" for his ease at hitting the top notes. The Venezuelan soprano Ines Salazar recalled hearing him warm up backstage and thinking it was a recording. Even when critics complained he had lost his voice, audiences didn't mind.

While opera lovers treasure recordings with soprano Joan Sutherland, Pavarotti slipped into the CD collections of the hipper set, mixing notes with Elton John, the Spice Girls, Sheryl Crow and Liza Minnelli, among others.

He was the best-selling classical artist, with more than 100 million records sold since the 1960s, and he had the first classical album to reach No. 1 on the pop charts.

U2 frontman Bono said Pavarotti was "a great volcano of a man who sang fire but spilled over with a love of life in all its complexity."

"No one could inhabit those acrobatic melodies and words like him. He lived the songs, his opera was a great mash of joy and sadness; surreal and earthy at the same time," Bono said in a statement. "Even when the voice was dimmed in power, his interpretative skills left him a giant among a few tall men."

4Some of the greatest opera stars were in his debt - from the young talent whom he fostered to Spanish tenor Jose Carreras, who said Pavarotti had supported him in moments of difficulty, including his battle with leukemia. Some would argue opera owed itself to "Big Luciano."

"When I wanted to construct the Bastille Opera House in Paris about 30 years ago, they told me I was crazy. Opera was dead, they said," former French Culture Minister Jack Lang told ANSA. "Pavarotti returned opera to popularity and contributed to its rebirth."

Pavarotti sought to commercialize opera, scoffing at accusations that he was sacrificing art. He relished that the hugely successful "Three Tenors" concerts with Placido Domingo and Carreras reached 1.5 billion people, filling stadiums.

In his 1995 autobiography: "Pavarotti: My World," he said the first of the "Three Tenors" concerts was a major event for each man. "I hope I am not immodest to think it was also unforgettable for most of the people who were present."

In a statement from Los Angeles, Domingo said he "always admired the God-given glory of his voice - that unmistakable special timbre from the bottom up to the very top of the tenor range." In Germany, Carreras told reporters he was "one of the greatest tenors ever."

"We all hoped for a miracle ... but unfortunately that was not possible," Carreras said.

5Pavarotti was born Oct. 12, 1935, the son of a baker who was an amateur singer. He had a meager upbringing, which he said was rich with happiness.

In his teens, Pavarotti joined his father, also a tenor, in the church choir and local opera chorus. He trained to become a teacher, and at age 20, with the Modena chorus, entered an international music competition in Wales. When the group won first place, Pavarotti began to dedicate himself to singing.

With the encouragement of his then-fiancee, Adua, he started lessons, selling insurance to pay for them. In 1961, Pavarotti won a local competition. A series of successes in small European opera houses followed before Pavarotti's 1963 debut at Covent Garden in London, where he stood in for Giuseppe Di Stefano as Rodolfo in Puccini's "La Boheme."

Having impressed conductor Richard Bonynge, Pavarotti was given a role opposite Bonynge's wife, Sutherland, in a production of "Lucia di Lammermoor" and, then, in a tour. It was the recognition Pavarotti needed. He also credited Sutherland with teaching him how to breathe correctly.

Debuts followed at La Scala in Milan in 1965, San Francisco in 1967 and New York's Metropolitan Opera in 1968. Pavarotti, who had been trained as a lyric tenor, began taking on heavier dramatic roles.

In the mid-1970s, Pavarotti became a true media star. He appeared in television commercials and began singing in hugely lucrative mega-concerts outdoors and in stadiums around the world. Soon came joint concerts with pop stars.

His name seemed to show up as much in gossip columns as in serious music reviews, particularly after he split with Adua Veroni, his wife of 35 years and mother of their three daughters, and took up with his 26-year-old secretary in 1996.

In late 2003, he married Nicoletta Mantovani in a lavish, star-studded ceremony. Pavarotti said their daughter, Alice, nearly a year old at the time of the wedding, was the main reason they finally wed after years together.

He was pained when he made headlines for tax evasion, saying he couldn't bear not to be seen as a good person, and reached a deal with authorities to repay roughly $12 million to the Italian government.

He had as many nicknames as hats. To some, he was simply "the Maestro." To his countrymen, he was "Big Luciano," beloved for both his talent and for spreading across the globe an image of Italian style and flair, a man at ease on the arm of Princess Diana as he was under a stadium spotlight.

And yet, at heart, he was a local boy. Pavarotti returned to his native Modena to convalesce after falling ill this summer, receiving a steady stream of well-wishers, including local officials and businessmen.

His oncologist, Antonio Frassoldati, said Pavarotti remained "serene" even as his medical condition worsened, and fought until the end. "I was struck by his character, his desire to live and to be involved in every decision," Frassoldati told Sky Tg24.

His manager, Terri Robson, says when Pavarotti died, his wife, Nicoletta, four daughters and sister were among those at his side.

Pavarotti himself was clear on his legacy. "I think a life in music is a life beautifully spent," he said, in a quote posted on his website after his death, "and this is what I have devoted my life to."