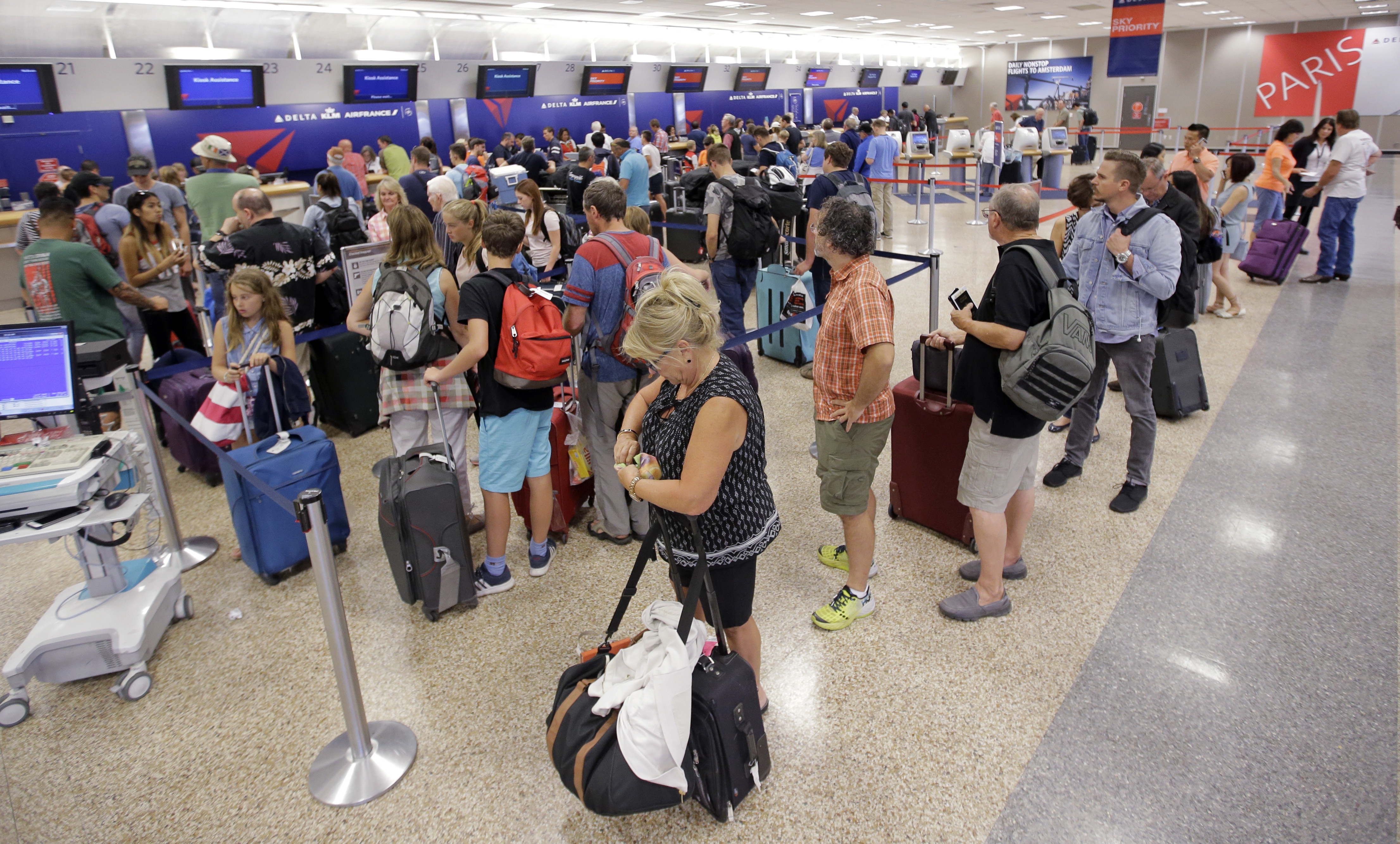 DALLAS -- At least half of all Delta Air Lines flights Monday were delayed or canceled after a power outage knocked out the airline's computer systems worldwide.

Delta canceled about 1,000 flights in all Monday due to a loss of power affecting its operations system-wide, the carrier said. "More delays and cancellations are expected Tuesday morning as Delta continues to recover its operations," it added.

About 14 hours after the outage at one of its facilities, Delta was struggling to resume normal operations and clear a backlog of stranded passengers. It sought to appease frustrated customers by offering refunds and $200 travel vouchers.

By midafternoon, Delta said it had canceled more than 740 flights, although its computer systems were fully functioning again.

Delta representatives said the airline was investigating the cause of the meltdown. They declined to describe whether the airline's information-technology system had enough built-in redundancies to recover quickly from a hiccup like a power outage.

Many passengers were frustrated that they received no notice of a global disruption, discovering that they were stranded only after making it through security and seeing other passengers sleeping on the floor. Delta said that the outage caused a lag in posting accurate flight-status information on its website.

At noon inside New York's LaGuardia Airport, Francesca Villardi still had no idea when her 11:50 a.m. flight to Fort Lauderdale, Florida, would depart.

The departure boards said her plane was leaving on time. She received different answers from three Delta employees, one of whom said she would be traveling to Cincinnati first.

"This is not organized at all," said the 51-year-old professional organizer from Pembroke Pines, Florida.

Delta said that about 2,300 of its scheduled 6,000 flights had operated by 5 p.m. Eastern time. The airline posted a video apology by CEO Ed Bastian.

A power outage at an Atlanta facility at around 2:30 a.m. local time initiated a cascading meltdown, according to the airline, which is also based in Atlanta.

WGCL-TV, the CBS affiliate in Atlanta, reported the problem was first uncovered when a flight was to take off from San Francisco.

The FBI tells CBS News transportation correspondent Kris Van Cleave it does not believe the computer issue was due to hacking, instead the airline blames a power outage in Atlanta overnight.

A spokesman for Georgia Power said that the company believes a failure of Delta equipment caused the airline's power outage. He said no other customers lost power.

Delta spokesman Eric O'Brien said he had no information on the report and that the airline was still investigating.

Flights that were already in the air when the outage occurred continued to their destinations, but flights on the ground remained there.

That has afflicted airlines in the U.S. and abroad.

Last month, Southwest Airlines canceled more than 2,000 flights over four days after an outage that it blamed on a faulty network router.

United Airlines suffered a series of massive IT meltdowns after combining its technology systems with those of merger partner Continental Airlines.

Lines for British Airways at some airports have grown longer as the carrier updates its systems.

On Monday in Richmond, Virginia, Delta gate agents were writing out boarding passes by hand. In Tokyo, a dot-matrix printer was resurrected to keep track of passengers on a flight to Shanghai.

"Not only are their flights delayed, but in the case of Delta the website and other places are all saying that the flights are on time because the airline has been so crippled from a technical standpoint," said Daniel Baker, CEO of tracking service FlightAware.com.

Many passengers, like Bryan Kopsick, 20, from Richmond, were shocked that computer glitches could cause such turmoil.

"It does feel like the old days," Kopsick said. "Maybe they will let us smoke on the plane, and give us five-star meals in-flight too!"

In Las Vegas, stranded passengers were sleeping on the floor, covered in red blankets. When boarding finally began for a Minneapolis flight -- the first to take off -- a Delta worker urged people to find other travelers who had wandered away from the gate area, or who might be sleeping off the delays.

Tanzie Bodeen, 22, a software company intern from Beaverton, Oregon, left home at 4 a.m. to catch a flight from Minneapolis and learned about the delays only when she reached the airport and saw media trucks and news crews.

Bodeen said that passengers were taking the matter in stride. "It doesn't seem really hostile yet," she said.

The company said customers whose flights were canceled or delayed more than three hours could get a refund and $200 in travel vouchers. Travelers on some routes can also make a one-time change to the ticket without paying Delta's usual change fee of $200 for domestic flights and up to $500 for international flights.