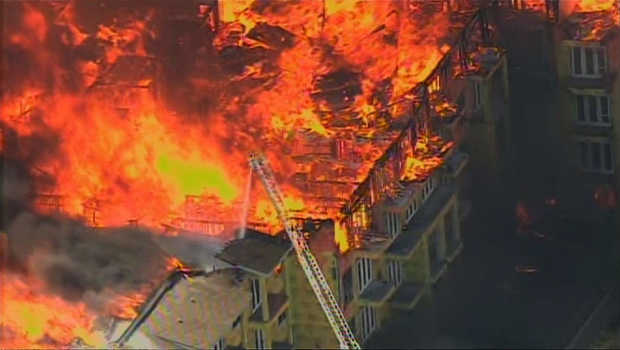 HOUSTON - An apartment complex that was under construction was engulfed in flames Tuesday, reports CBS affiliate KHOU.

Thick black smoke from the fire, which had been burning out of control, could be seen from miles away, the station reports.

The fire started at 12:30 p.m. and quickly went to five alarms as the flames raced through the complex. It appeared to be under control by 2 p.m. but fire crews remained on the scene.

There is no word on injuries, but a construction worker was rescued from the third floor, according to the Houston Fire Department.

Employees at a nearby high-rise said the worker tried to use a fire extinguisher to put out the flames. They watched in horror as the fire suddenly began spreading across the roof and the man looked desperately for a way to get down.

"The firemen did rescue him, but he did have to drop down a floor as the entire top floor started burning," a woman who did not want to give her name said in an email. "Once he was on the ladder, a section of the building collapsed and was very close to hitting the ladder.

"It is very hot," said KHOU reporter Marcelino Benito from the scene. "Imagine how tough it is for the firefighters in heavy gear battling this fire."