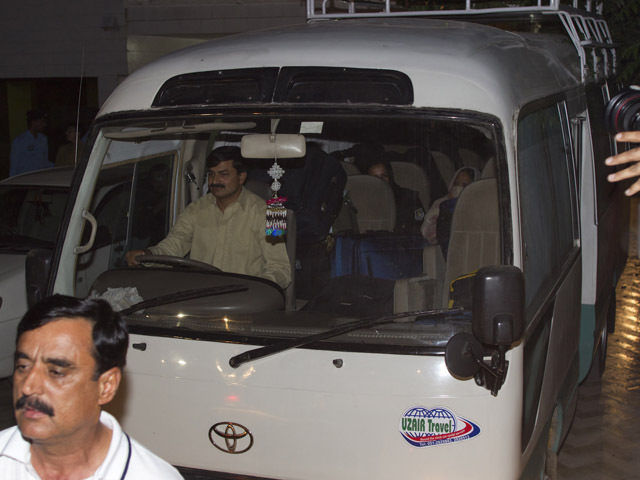 (CBS News) ISLAMABAD - Osama bin Laden's three wives and 11 children were cleared to leave Pakistan Thursday night, having spent the past year in the south Asian country after U.S. Navy SEALs tracked and killed the world's most hunted terrorist in the northern city of Abbottabad, the family's lawyer told CBS News.

"They have been cleared to leave Pakistan. They are heading to Saudi Arabia in a little while," said Aamir Khalil, the family's Pakistani lawyer, who spoke to CBS News after midnight local time Thursday.

The wives were convicted on April 2 and sentenced to 45 days in prison for illegally entering and living in Pakistan. The prison term, spent at a well-guarded house in Islamabad, ended earlier this month.

It was not immediately clear if Saudi Arabia was the final destination of the entire family or whether one of the three wives - Amal Ahmed Abdel-Fatah al-Sada, a Yemeni national - along with five of her children, will be allowed to travel to Yemen.

When asked for the family's destination, Khalil told CBS News, they were "heading to Saudi Arabia" but added that the "Yemeni wife and her children will have full liberty to travel onwards to Yemen if they wanted to."

In the past, Pakistani officials have reportedly demanded in background discussions with Saudi officials that the entire family return to Saudi Arabia and stay there indefinitely.

This demand came after reports surfaced of bin Laden's Yemeni wife seeking to give high profile interviews to at least two Arab TV channels upon her return to Yemen. Pakistani officials familiar with investigations of bin Laden's family members have reportedly concluded that the Yemeni wife was present with him when US Navy Seals stormed the house in Abbottabad, killed him in his room and took his corpse, which was later buried at sea.

"I understand, Pakistan has been worried about explosive accounts coming from the Yemeni wife if she has access to free media" said a Western diplomat in Islamabad who spoke to CBS News on condition of anonymity. "It is impossible to tell if there are any specific conditions that have been agreed between different parties for facilitating this return (of Osama bin Laden's family members) to Saudi Arabia" added the diplomat.