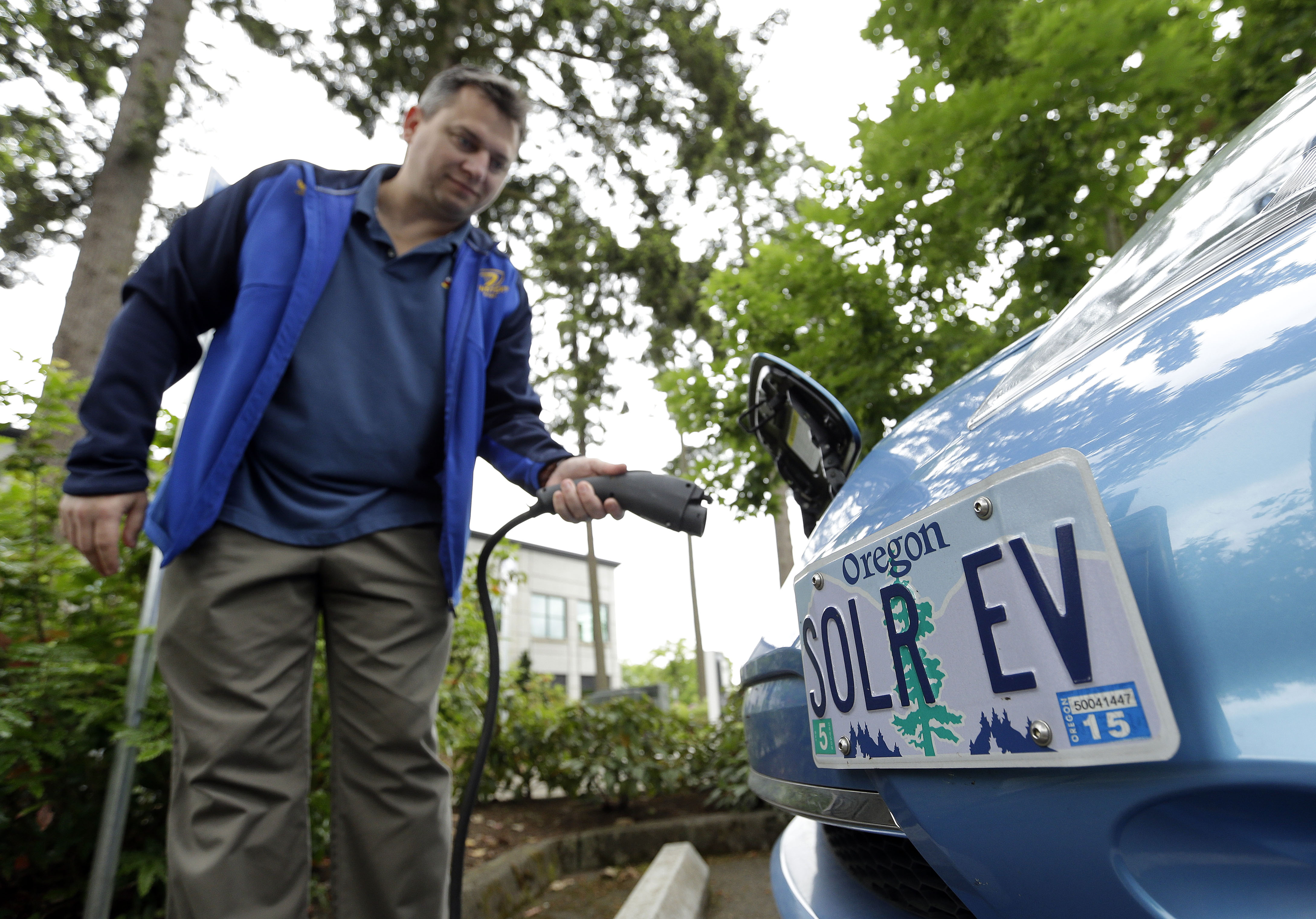 PORTLAND, Ore. -- Oregon is about to embark on a first-in-the-nation program that aims to charge car owners not for the fuel they use, but for the miles they drive.

The program is meant to help the state raise more revenue to pay for road and bridge projects at a time when money generated from gasoline taxes are declining across the country, in part, because of greater fuel efficiency and the increasing popularity of fuel-efficient, hybrid and electric cars.

Starting July 1, up to 5,000 volunteers in Oregon can sign up to drive with devices that collect data on how much they have driven and where. The volunteers will agree to pay 1.5 cents for each mile traveled on public roads within Oregon, instead of the tax now added when filling up at the pump.

Some electric and hybrid car owners, however, say the new tax would be unfair to them and would discourage purchasing of green vehicles.

"This program targets hybrid and electric vehicles, so it's discriminatory," said Patrick Connor, a Beaverton resident who has been driving an electric car since 2007.

State officials say it is only fair for owners of green vehicles to be charged for maintaining roads, just as owners of gasoline-powered vehicles do.

"We know in the future, our ability to pay for maintenance and repair... will be severely impacted if we continue to rely on the gas tax," said Shelley Snow with the Oregon Department of Transportation.

Other states are also looking at pay-per-mile as an alternative to dwindling fuel tax revenues.

While growing in popularity, electric vehicles and hybrids are still in the minority on American roads, even in a state as green-minded as Oregon. Of 3.3 million passenger cars registered in Oregon at the end of 2014, about 68,000 were hybrid, 3,500 electric and 620 plug-in hybrid. A decade ago, only 8,000 hybrids were registered.

However, fuel-economy for gas-powered vehicles has been increasing as technology is developed that addresses public concerns about greenhouse gas emissions and dependence on foreign oil.

Oregon is the only state to actually test-drive the pay-per-mile idea.

The gas tax provides just under half of the money in Oregon's highway fund, and the majority of the money in the federal Highway Trust Fund, of which Oregon receives a portion.

Oregon's share of the fuel tax over the past two decades has been mostly flat and in some years declined, state data show. In 2009, the Legislature raised the tax from 24 cents to 30 cents per gallon, but that's not enough to avert shortfalls, state officials said, because construction costs increase with inflation.

Volunteers will still be paying the fuel tax if they stop for gas. But at the end of the month, depending on the type of car they drive, they will receive either a credit or a bill for the difference in gas taxes paid at the pump.

Private vendors will provide drivers with small digital devices to track miles; other services will also be offered. Volunteers can opt out of the program at any time, and they'll get a refund for miles driven on private property and out of state.

Drivers will be able to install an odometer device without GPS tracking.

For those who use the GPS, the state and private vendors will destroy records of location and daily metered use after 30 days. The program also limits how the data can be aggregated and shared. Law enforcement, for example, won't be able to access the information unless a judge says it's needed.

"This is the government collecting massive amounts of data and we want to ensure the government doesn't keep and use that data for other purposes," Carson said.

The OreGo program is projected to cost $8.4 million to implement and is aimed to gauge public acceptance of the idea of charging motorists per mile of road they travel. It will be up to the Legislature to decide whether to adopt a mandatory road usage charge.

One of the biggest concerns will be whether a program like OreGo could actually discourage people from buying electric or hybrid vehicles.

Drive Oregon, an advocacy group for the electric-vehicle industry, supports the program because every driver should pay for road repairs, executive director Jeff Allen said. Still, he said, "The last thing we need to do right now is to make buying electric cars more expensive or inconvenient."

The road ahead for electric vehicles
More